Coming in April this year from Archaia is Cow Boy by Nate Cosby (Pigs, Jim Henson's The Storyteller) and Chris Eliopoulos (Misery Loves Sherman, Franklin Richards: Son of a Genius).

Boyd Linney is a bounty hunter and a damn fine one. This tough as nails 10 year old traverses the ol' west on a horse that ain't his, roundin' up his felonious kin folk and placin' them before the long arm of the law. Sure, he's a tough kid but at the end of the day, a kid's just a kid.

Sounds cute, right? Well it is. But don't get too comfortable, this isn't a kids book.
Sure, it doesn't have bloody gun battles and such but Cow Boy is a deceptively grown up book. Picture the Muppet Babies venturing into one of their imaginary adventures and into the world of Sergio Leone's A Fist Full of Dollars, there you have Cow Boy. Cosby writes Linney as a real straight-man, at least in the first chapter. This in itself bumps up the humour with its juxtaposition between what this 10 year old kid says, does and his cartoony appearance. All the while laying a foundation which threatens to turn on the seriousness at any moment. It was quite exciting to expect the unexpected. I haven't felt that in a comic book in quite a while. In no way is this next comment a slight against Nate Cosby as an editor, but for completely selfish reason, I'm glad that he has left the editorial desk because he is a bloody good writer! That said, he was the editor of my favourite series from the last few years - Thor: The Mighty Avenger. With Jim Henson's The Story Teller, Buddy Cops and the phenomenal Pigs under his belt Nate Cosby is a writer to keep your eyes on. He's the guy that will have people saying "oh yeah, I've been reading Cosby's stuff for years". Jump on the bandwagon now, hipsters. This guy is destined for greatness (no pressure, Nate!).
Chris Eliopoulos is a surprise package. His art style hasn't changed a great deal between Misery Loves Sherman, Franklin Richards and now but was has changed is the amount of expression that he manages to elicit from these cartoony characters is truly impressive. He proves that he is a master of the form by drawing emotion from nothing more than a circle, some lines and dots. Linney breaks your heart and splits your sides all thanks to Eliopoulos' work. His illustrations are somewhat Bill Waterson-esque and leave me wondering if our main character, Boyd, is named so after Mr. Waterson. Further to providing the illustrations, he also inked, coloured and hand lettered every page.  The colouring is one of the first things that you notice. The subdued hues are reminiscent of colour palettes from any Western genre film. Lots of browns and greys make it feel as though you are viewing a western film, watching Linney traipse from one dustbowl to the next. Hand lettering holds a special place in my heart and Eliopoulos doesn't disappoint. Slight imperfections are what make hand lettering great, no two A's are the same.
Between each chapter we get a western themed short story by some of the hippest kids in comics today, Roger Langridge (Thor: The Mighty Avenger, Snarked), Brian Clevinger & Scott Wegener (Atomic Robo), Mike Maihack (Cleopatra In Space) & Colleen Coover (Jim Henson’s The Storyteller). All of these stories are delightful and break up the pace of Linney's journey nicely. My favourite would have to be Langridge's The Man with no Underpants which positively drips with absurdity and is downright fun. Colleen Coover's comes a very close second but then again, I'm always a sucker for her work. 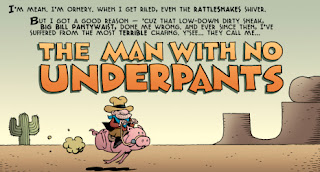 Although the copy that I was supplied with was digital and unfinished, I can only imagine that the Archaia hardcover release in April will be spectacular. Archaia have been bringing out the best quality and best looking hardcovers across the last 2 years, at least. I have no doubt in my mind that the hardcover of Cow Boy will be no different.
I strode into Cow Boy with a handful of expectations and I was quickly disarmed to be left enjoying a book which is an incredible amount of fun while still managing to tug at the ol' heart strings. Cosby and Eliopoulos have created a beautiful book which will have you experiencing just about every emotion possible, it's just that good.
all ages comics Archaia Brian Clevinger chris eliopoulos Colleen Coover Comics Cow Boy Mike Maihack Nate Cosby Nathan Cosby Review Reviews Roger Langridge Scott Wegener