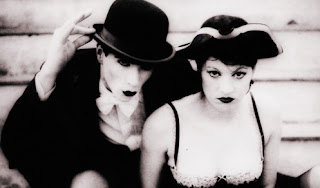 As I approached the entrance to Newtown's Enmore Theatre, I felt very out of place. I felt as though my jeans and a t-shirt were entirely underwhelming in comparison to the bulk of the crowd in their top hats, waistcoats, corsets and fishnets. In fact, I even saw a chap with a sceptre and crystal ball being all wizardy.
In the crowd there were more costumes than at any comic book convention I've ever been to and never have I seen a crowd so excited. Before the doors had even opened, every single person was waiting on baited breath for those big glass doors to swing open, allowing us all to enter into a night of music, theatre, comedy and utter mayhem.

The Enmore is an ageing venue with floors that just as sticky as they are creaky and a facade that tells tales of glory days past. My fellow punters jostled for the best viewing location, perching themselves on the slanted dance floor just in time for her arrival. Amanda Fucking Palmer entered stage right and the crowd collectively lost their shit. She slinked on stage dressed in a kimono and officer hat like a strange vision of what could of been if the Axis forces had won the war. Announcing their first guest, The Jane Austen Argument, the lovable duo of Melbournians Tom Dickins and Jen Kingwell.
An ever present stalwart of the AFP machine, they gracefully pranced on to the stage smiling from ear to ear. Before opening their mouths whether to sing or to speak it was obvious that these two love what they do and especially love that there are people that love what they do. There was even one point where it felt as though they loved that people loved that they loved what they do, that's a whole lotta love. The ever dapper Tom was dressed in tails that were given to him earlier that night opened kicked off proceedings showing baring his soul and telling a story, this kids voice is beautiful. With Jen, dressed like a fairy queen from a fantasy novel, on the keys and the occasional vocal they finish their set between loving glances and to a boisterous applause.

AFP returns and the crowd again explodes while she introduces The Bedroom Philosopher, an all singing, all dancing, folk/comedy/anthropological performing man of mystery who seemed to take great pleasure in igniting state rivalries (fuck you Melbourne). Looking like a clean shaven Graeme Garden he lit up the stage and completely blew away all of the expectations that I didn't know I had. Between songs about YouTube, Centrelink and the hipster paradox he denounced the pigeonholing of mankind with the hilarious, Acronymphomaniac. He caught me off guard with his hipster gags about David Bowie while I unapologetically stood wearing my finest Bowie tee.
Now, it was time. Brian Viglione, a classically handsome Chaplinesque tramp sauntered out onto stage followed by Amanda who quickly disrobed revealing a black bra, black military jodhpurs and knee high boot, you know, the usual. She looked like a character from Tim Burton's imagination. Then came the onslaught. Yes, Virginia visited and explained how Sex Changes everything. The Dresden Dolls arrived. Amanda pounded ferociously on her poor keyboard, all fists and karate chops while amidst all the violence the keyboard responded with beautiful melodies. Brian too flailed at the skin of his drum kit with such vigour that makes me think that it must have cheated on him. This was my first experience of The Dres-O's live and it did not disappoint. Brian is probably the best drummer that I have ever seen live. Yes, even better than Skid Row's Rob Affuso in 1993. Yes, better than Def Leppard's Rick Allen in 1994 and yes, better than Queens of the Stone Age's Gene Trautmann in 2004. I mean no disrespect to any other drummer but Brian Viglione gave the most physical and theatrical performance that I have ever seen from a musician, ever.
Its hard to believe that The Dresden Dolls are a duo, they dominate the stage like an orchestra. What make it easier to believe is when you witness Amanda belting out lyrics while kicking the keyboards arse and Brian singing, playing drums and guitar all at once. Throughout the performance Amanda and Brian shared looks of mutual admiration and love while the crowd fell in love with them. Early last year I was lucky enough to spend a short amount of time with Amanda and her tour manager Eric, two finer people you will never meet (read about it here). What I learned from this time, albeit fleeting, was that Amanda loves. She loves what she does and she loves doing what she does for others. She loves making people love and it is through her music and performance that she does this. Like two drama class rebels Brian and Amanda would ham it up, play to the audience and go so far as to enter the crowd risking hickies or worse.
What I witnessed that night was the only kind of group-love encounter that I would ever care to be a part of. The entire audience was unified by their love for two people and their amazing musical machines and the craziest part, is that they we all felt loved in return. This is an inextricable part of the Dresden Dolls experience.
The night was finished with what I can only assume was a number just for me. A song that I used listen to with my Dad until it was covered by Faith No More and then I would listen to it with my brother, a special Dresden Dolls cover of Black Sabbath's War Pigs. War Pigs just for me. It all came to a close and the room reverberated with what may have been feedback or it may have been the Punk/Rock/Cabaret Gods (Gary and Delilah) setting the very sound waves on fire. The crowd roared and applauded then hugged and kissed sweaty heads. I left the Enmore smiling a big smile, bought some Twisties and a Coke and drove myself home when I eventually remembered where I parked the car.
AFP Amanda Palmer Bedroom Philosopher Brian Viglione Concert Enmore Jane Austen Argument Jen Kingwell music The Dresden Dolls Tom Dickins

Beauty and the Geek Australia wrapped up last week on channel 7 with newly remodelled 007 body double Michael Price and his partner Jessie crowned as the winners! As far as ratings go, Beauty and the Geek season two was a great success with the final episode placing 3rd in the weekly ratings.  Follow on for my chat with Michael.
Read more