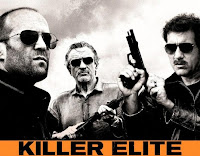 Now, here's a film that you may not have heard much about. To be honest, I hadn't until this trailer fell into my lap this morning but from watching the trailer I'm really looking forward to watching De Niro kick some arse! Jason Statham looks like he is doing a wonderful Jason Statham impersonation while Clive Owen does a wonderful Nicolas Cage impersonation. All of that aside, it actually looks like a good fun action film! Check out the trailer after the jump.


"Inspired by true events, Killer Elite is a new action-adventure spy film that follows Danny (Jason Statham), one of the world's most skilled special-ops agents. Lured out of self-imposed exile, Danny reassembles his crack team of operatives to execute a near-impossible mission of retribution - to rescue his former mentor and partner Hunter (Robert De Niro). Together they must penetrate the highly feared and respected military unit, the British Special Air Service (SAS), to take down a rogue cell of soldier assassins and their leader Spike (Clive Owen) before their actions create a global crisis.


Killer Elite's whirlwind journey of action hurtles across the globe: from Mexico to Australia, from Paris and London to Oman and Wales. The film is based on Ranulph Fiennes' controversial non-fiction bestseller 'The Feather Men'."

Only at the movies February 23.