Review by Stu - The Artist 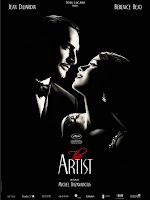 Hopefully right now a board meeting is underway in a Hollywood studio, in which executives are discussing the types of films they wish to be remembered for making. These misguided pompous executives bandying around terms such as legacy and dynasty, attempting to liken the studio to the Greek or Roman empires. Debate raging on as to which 80’s or 90’s television show needs to brought to the big screen for a ‘reimagining’ for another film the public is not demanding to see. Personal assistants with their hands cupped over the mouth piece of their mobile phones scurrying around informing their masters that the latest High School Musical spin off has just grossed a million billion dollars. Amongst all the chaos I pray that at least one high powered person has seen Michel Hazanavicius’s beautiful film The Artist, for this is a film which may have serious ramifications within Hollywood.
The Artist is a relatively simple tale set in 1927 which follows George Valentin (Jean Dujardin), the biggest star in Hollywood, as he deals with the introduction of sound in cinema. George meets an up and coming actress Peppy Miller (Berenice Bejo) who enjoys a meteoric rise with the advent of the talkies, transversally George’s career is destroyed as he refuses to accept the new format.

Jean Dujardin is channelling Gene Kelly to the point that at times it felt as though the master of song and dance had been digitally added to the film. Jean Dujardin oozes charisma as a leading man which fits perfectly with the quirky angelic style of Berenice Bejo. The leads are supported superbly by John Goodman (who refuses to age) and James Cromwell who gets every ounce of presence out of his wiry frame. The masterstroke of this film is the sound design, the musical selections are inspired and poignant, namely the use of the song Pennies from Heaven. Without the sound of actors speaking the emphasis on the music is obvious, it reminded me of the Looney Toons cartoons that used classical and bombastic opera music to convey the tone of scenes.
So how does a small independent film that has only grossed fifteen million dollars to date have serious ramifications for Hollywood? For starters The Artist is shot in black and white, it’s screened in a 4:3 aspect ratio (takes up about 2/3 of the screen) and it’s silent albeit for music. It borrows heavily from the classic era of film making; well defined characters, sensational music and themes grounded in reality. The presentation gives the film a sense of authenticity as if this film is a lost gem which someone stumbled upon in the basement of an old theatre. The reduced screen size felt as though I was peering through a key hole into a room where the film was being played out, an extremely immersive feeling. 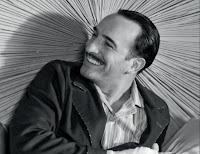 Film makers seem too concerned about remakes of old properties and studios want products that have a built in fan base. This film may inspire true students of film to focus on what made these older films so effective before the age of computer graphics and over complicated plots. Just picture a return to the grand scale of 50’s musicals, the set design of the science fiction epics, to practical effects and the witty wordy screen plays of the 70’s. There are so many tools available to film makers which sadly feel as though they aren’t be utilised. Today any one can film something on their smart phone and post it online in minutes; however this doesn’t mean they should. The Artist shows what magic can be found when truly talented people investigate film history.
It’s no surprise that this film has been nominated for best film. Like Hugo it is a love letter to a cinema, most notably Singing in the Rain. The Artist is a very special film which must be supported so the studios realise that there is a market for people who are so passionate about keeping the art of cinema alive for generations to come.
Artist Berenice Bejo Jean Dujardin Movies Review Reviews The Artist