Contraband is the latest film by Baltasar Kormakur (of 101 Reykjavik fame) which follows a few days in the life of reformed smuggler, Chris Farraday (Mark Wahlberg), as he is drawn back into the game following his brother-in-law Andy’s (Caleb Landry Jones) bungled job for drug lord Tim Briggs, played by the ever-menacing Giovanni Ribisi. Chris reunites with his old crew and heads to Panama for the traditional ‘one last job’ in order to placate a disquieted Briggs and protect his family from his punitive fury. Whilst Chris is away he entrusts the welfare of his wife (Kate Beckinsale) and two children to his best friend Sebastian Abney (Ben Foster).

The plot of Contraband is a fairly generic one – the tale of the retired criminal who comes across an obstacle and is forced to return to their erstwhile ways – think Gone in 60 Seconds. There is nothing wrong with this as a story device; in fact it can be rather compelling in the right hands. For instance the aptly named Heist, directed by David Mamet, showed what can be done if the tropes of the genre are delivered creatively. The major problem with Contraband is that Chris’s protective instinct for his family, as motivation to get back into smuggling, loses credibility as we witness just how much fun he seems to have being a bad guy. The minute he gets back onto the cargo ship it’s like he doesn’t have a care in the world except for the moments when he has brief phone calls from his wife. Chris's lack of adequate concern reduces the emotional investment of the audience and their interest in the outcome.

The Panama sequence of the film cuts into the movie as if it was lifted straight from a South American made-for-television movie. It borders on ridiculous only because it betrays the style and tone that the film had fought so hard to set in place up to this point. Throughout the film we get the sense that it’s a gritty realistic world populated with hard working Irish-American blue collars. The sequence in Panama introduces us to Latino gangsters and SWAT police engaging in open warfare on the streets. This film revolves around smugglers, which implies a level of skill and finesse. The shoot out just feels lazy and misplaced. The scene had no tension to it because it wasn’t as if our crew of smugglers was going to be gunned down at the 40 minute mark of the film. 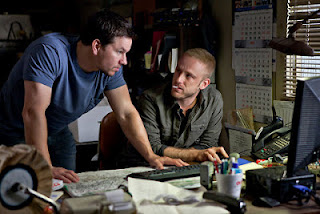 The strengths of the film came from the acting performances of Ben Foster and Giovanni Ribisi, who, no matter what film they are in, always bring a sense of commitment and realism to their roles. Giovanni Ribisi seems to revel in any role that has him pointing a gun and looking like a junkie. Ben Foster is on par with the likes of Ryan Gosling, Emile Hirsch and Joseph Gordon Levitt as part of the new wave of talented young male actors in America. Whilst these two are the standout performers we must take a moment to ponder what has become of Kate Beckinsale’s career. The once promising and beautiful actress who was so loveable in films such as Much Ado about Nothing and Cold Comfort Farm has been reduced to a plastic-surgery-addled bystander. In this film, she was entirely without the charm that characterized her in earlier roles and, fittingly to her utterly transformed physiognomy, she plays the blonde hollow trophy wife.

Ultimately, the heist proves engaging to watch as it unfolds, although there is a lack of real tension in the finale. It delivers, as expected, the big unveiling of Chris’s mastermind plan with a few twists and turns, not all of which are entirely predictable. Contraband is a breezy film which doesn’t ask too much of its audience and in return doesn’t offer a great deal. It’s a film which we may quickly forget as 2012 rolls on.
Ben Foster Contraband Giovanni Ribisi Kate Beckinsale Mark Wahlberg Movies Review Reviews