Do you want to choke folks from a distance or power your Chevy Volt for free? Have you ever wanted to cut down those annoying little burlap sacked Jawas? I mean honestly, who sells R2 units with bad motivators? If you answered yes to any of these questions, you're well on your way to becoming a dark lord. Luckily for you Dan Wallace is back with all you need to know to fast track your path to the dark side in his new book, Book of Sith.

Check out our interview, images of the book and an EXCLUSIVE page on Sith Warbeasts!

Ryan: The last time I spoke with author Dan Wallace was in 2010 before the release of The Jedi Path, a handbook to the light side of the force. Well, now he is back to indulge all of us black hearted n'er-do-wells with Book of Sith. Thanks for speaking with me again, Dan.
Dan: It's a pleasure!

Success pending, was it always planned to do a dark side tome following Jedi Path?
It was the logical conclusion to do a dark side counterpart to the light side original, but at first we weren't sure what direction we were going to go. It was possible that Lucasfilm might not have wanted to go with a Sith version, so we came up with a half-dozen other dieas just in case. But a Sith book was always our first choice.
Actors often say that it's more fun to play the villain. Is it more fun to WRITE the villain?
In a lot of ways, yes. Since I was trying to write the Sith sections as if I were the actual, in-universe Sith Lord who came up with that particular philosophy, I really tried to place myself in their shoes and not just assume they followed the dark side because they were just eeeeeeevil. In the real world I certainly wouldn't like any of these guys, but their self-absorption, pursuit of power, and in some cases their fear of death are all very recognizable human motivations.
Unlike your numerous encyclopedic works, Book of Sith is written in the first person as though it was a compilation of knowledge from generations of Sith Lords. Is it difficult to capture the voice of certain characters?
There are six point-of-view authors -- the ancient spellcaster Sorzus Syn, Darth Malgus from The Old Republic, Darth Bane of the "Rule of Two," Mother Talzin from Star Wars: The Clone Wars, the Emperor's master Darth Plagueis, and Emperor Palpatine/Darth Sidious himself. It was actually very refreshing to capture a different voice for each of them, since all six existed at different times and believed in different things. Unlike The Jedi Path, where it was a single textbook with a much more uniform feel. 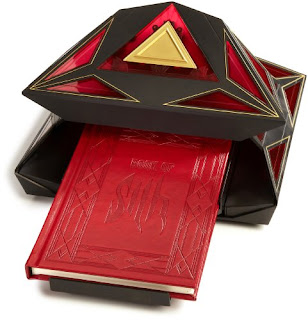 Chapter one is written by an all new character to the Star Wars universe, Sorzus Syn. Since she came from your very own mind, can you tell us a bit about her?
She's one of the original Jedi who rebelled and fought against the Jedi Council some 7,000 years before
the movies, and who were all banished to Sith Space after they lost. She's an alchemist and monster maker who is fascinated by the occult lore of the Sith people, but who has no respect for the Sith as actual people.
As a Star Wars geek, it has to be a touch awesome to have YOUR OWN character in the SW universe forever more.
It is, and it's even more fun when you see something you named or created show up in an unexpected place later on. For the Essential Guide to Planets and Moons in 1998 I gave the Sith hounds on Korriban the name tuk'ata, and when I was playing The Old Republic recently I was weirdly pleased when I heard an NPC say the name back to me in dialogue. It's a little thing, but it's fun to know you've codified something in popular lore.
Does this come with additional benefits like private screenings, a Skywalker Ranch tour or a novelty George Lucas stick on beard?
No beard yet, though I have been to Skywalker Ranch and I got to attend an advance press screening for Episode III: Revenge of the Sith. Come to think of it, where is that beard?
The book comes encased in a very impressive holocron crystal enclosure. Was it important to raise the bar from the Jedi Path release?
I think it was, and I have to give credit to lead designer Rosanna Brockley at becker&mayer who made the pyramidal holcron the amazing artifact that it is. It's a gorgeous Art Deco-looking case to begin with, and it extends and retracts at the touch of a button with lights and sounds, including a sound effect of the Ark of the Covenant slamming shut from Raiders of the Lost Ark.

How much input did you have in the design process of the holocron enclosure?
The case was all Rosanna and her team, though I did have some input in the removable items contained in the case and in the pages of the book. These include a lightsaber crystal, a Nightsister talisman, a Sith burial shroud, a war map, Palpatine's secret planning document, and an Imperial propaganda poster.

What's next for Darth Wallace?
Later this summer I have a book coming out from DK Publishing called Batman: The World of the Dark Knight. It's a look at everything Batman, and comes with the gorgeous images you expect from a DK visual guide.
Jar Jar Binks: unholy abomination or misunderstood ragamuffin?
Pawn. Palpatine used Jar Jar to make a key move so he could get coronated as Emperor. I've always kind of wondered what happened to Jar Jar afterward.
Dan Wallace: Jedi Knight or Sith Lord?
Smuggler. Let those guys fight it out among themselves. There's money to be made on the fringe!

Many thanks go to Mr. Wallace for his time. Book of Sith is available now from good bookstores and online. As for Aussie fans, have a look at Book Depository for a good price on Book of Sith and free shipping!