Interview - The Men Behind The Hunter, Daniel Nettheim & Vincent Sheehan

Released in October 2011 to widespread critical acclaim, The Hunter has become an international sensation. There are so many reasons to love this film: the cast is magnificent, the score beautiful and the cinematography mind boggling. All of this is for nought unless you have a talented director and producer to lead the pack, drawing each of these elements together into a seemless work. Such is The Hunter.
Recently I had the absolute pleasure if speaking with the director of The Hunter Daniel Nettheim and Producer Vincent Sheehan. Check it out after the jump!
Ryan: First of all, please allow me to congratulate you on the success of The Hunter, 14 nominations in the inaugural AACTA awards is impressive in itself but what is even more exciting is the future plans for the film. How has the reaction been overseas?
Daniel: Very solid. Apart from the great sales I've attended festivals in Toronto, Busan, Doha and Rotterdam where the public have really engaged with the film. The response at the q and a sessions has been very engaged and overwhelmingly positive.

Vincent: Agree.  For me, I could not have asked for a better reaction than at the world premiere in Toronto.  Daniel has been able to experience audiences all over the world, but sitting in the Ryerson Theatre in Toronto with 600 captive film lovers, and to hear them all gasp, and then hear their comments and questions after the film was a very rewarding experience and satisfying conclusion to the long journey of making The Hunter. 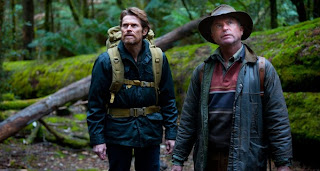 The landscape in Tasmania is as much a character in the film as any human. What were the challenges that you faced shooting on location?
D: The changing weather conditions were always a challenge, as was the frequent cold. The sheer visual beauty more than compensated for these obstacles.

V: Daniel is being too polite!  Leeches, snow blizzards, biting sun, mud, rocky terrain, torrential rain. Often all in one day or even one hour.  But I certainly agree that the shear beauty of the landscape proved to be an endless fuel for inspiration.

There are some big name performers in this film with Willem Dafoe, Sam Neill and Frances O'Connor  who are also supported by a fantastic Australian ensemble. Are there any difficulties in working with such big names?
D: To have talented and experienced actors in the cast only makes my job easier. It gives me more time to work with the less experienced actors, like the talented kids we had in the cast.
Vincent, did your experience with Sam Neill on Little Fish seal the deal on his role as Jack?
V: I would love to say absolutely, but I am sure that Sam chooses roles based on the character and script and the other elements - including the director and other Cast.  However, I would also like to think that the Little Fish experienced contributed in some small way.
On this film you had cinematographer Robert Humphreys, editor Roland Gallois and a score by Matteo Zingales, Michael Lira and Andrew Lancaster among many other incredibly talented people. How did this collection of Australia's best and brightest come about?
D: Pretty much all the crew were people I had worked with before or knew as friends. In each case they responded well to the script and were excited about the elements they would have to work with. 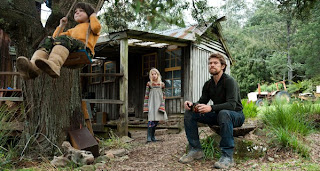 The Hunter was the closing film at the International Film Festival Rotterdam and will be headlining SXSW (South by South West) in Austin Texas. While traipsing around the Central Plateau of Tasmania did you ever dream that the film would receive such a reception?
D: It is always the intention for the film to find a wide audience. The festival circuit is a great bonus, and one of the great rewards for all the hard work.
V: What is of equal and perhaps even more importance than the many festival invitations, is the world sales.  The Hunter has sold to almost every major territories around the world (and many smaller ones) and with a theatrical release planned for Japan, US, UK, Canada and Germany it is very rewarding to know that many people will experience the film in a cinema.


Have you had the chance to speak with Julia Leigh, the author of The Hunter, for her thoughts on the film? If so, how did she find it?
D: Julia has seen the film twice now.i think she enjoyed it more the second time when she was not focusing on the changes we had made to her novel.
Finally, after what must be weeks, if not months of travelling on the bandwagon are you missing Sydney yet? If its any consolation, the weather has been lousy.
D: Always nice to come home, and I need to start focusing on my next projects.
Thank you so much for taking the time to speak with me and congratulations again for The Hunter's current and no doubt future success.
The Hunter is available now on DVD and Blu Ray from Madman
Daniel Nettheim Interview Interviews Madman Movies Sam Neill The Hunter Willem Dafoe