Safe House has come along at a great time. It is in a completely different space to The Artist, The Descendants and Tinker Tailor Soldier Spy. While the latter are all serious Oscar contenders which may feel stuffy to some of the viewing public, Safe House is a fun if not by the numbers spy action/thriller.
Matt Weston (Reynolds) has spent the last twelve months posted as the housekeeper of a CIA safe house in Cape Town, South Africa. In this time he has seen no action at all. This all changes when Tobin Frost (Washington), a rogue CIA agent, is brought in for "questioning". A loyal company man, Weston must decide whether he stays true to the Agency or trusts in a man who is wanted on 4 continents, a master manipulator and the best damn agent the CIA has ever seen. Let the black-bagging and water boarding commence.

Fear not, Ryan Reynolds does get his shirt off in this film and within the first 3 minutes no less. I can't help but feel that particular clause will be written into every one of his contracts for the foreseeable future. In this circumstance, seeing his buff body actually serves a second purpose, it shows that he has the physicality to hold off against a veritable swarm of baddies both while armed and with fisticuffs. There is a particularly brutal fight scene towards the end of the film which winds up being a sticky, bone shattering mess of well edited free for all. Aside from this fact, he was never particularly convincing as an elite intelligence operative. Washington, on the other hand, showed the charisma and cool headedness that would only come from years of front line field work. His fighting ability was also more polished which lent weight to the argument that CIA operatives are grown over time and that the best was yet to come for the rookie.

The ensemble cast is to a certain extent more impressive than the lead actors which eventually leads to a feeling that they were desperately underused. Vera Famiga (The Departed), Sam Shepard (The Right Stuff) and Brendan Gleeson (The Guard) are given bit parts which are ultimately instrumental in the closing arc of the film but aren't given the amount of screen time that such talent demands.
Safe House utilises its South African setting to full effect. From scene to scene we are taken from markets to shanty towns and finally a small town farm in the middle of nowhere. Instead of flitting from Cape Town to Dubai to Tokyo and Seattle ala MI:4 we are given a setting, a realistic setting and it works. 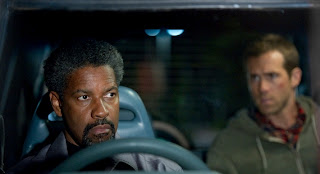 Director Daniel Espinosa has put together a great action film in the style of Tony Scott. Reasonably realistic fight scenes and completely unrealistic car chases are kinetically charged flowing from head shot to head shot. A nice touch regarding the firearms used is that they are many and varied. The CIA don't have a standard issue sidearm so the use of a SIG-Sauer P229, Tokarev TT33 and Steyr M9A1 isn't as strange as it may look. Although a 8 round magazine capacity in the Tokarev makes it a somewhat unlikely choice of sidearm for field work. Semantics, I know. It would be easy to make comparisons to the Bourne films but in this instance, the fight scenes are so scrappy and filled with desperation that they are believable, even without the eye poking that I would resort to.
One notable inclusion is a scene which includes a black bagged prisoner and a water boarding which was, up until recently, a political fair ball. In January 2009 the Obama administration banned the use of water boarding during suspect interrogation. The TV series 24 first aired in 2001and featured water boarding being used on suspects of terrorism. Unlike 24, this "technique" has a negative tone in Safe House, a sign of the changing mentality in relation to interrogation and the treatment of prisoners.
Safe House really surprised me. I wasn't expecting much but what was delivered was a fast paced action film with a dash of espionage. Safe House is now in cinemas nationally.
Daniel Espinoza Denzel Washington Movies Review Reviews Ryan Reynolds safe house