A Dangerous Method - Review by Stu

In his last few films, director David Cronenberg has explored themes such as the nature of violence, the morality of deception and the mechanics of middle American lifestyles. These themes have been at times confronting and thought provoking. In 2005’s A History of Violence we saw how violence has defined a nation and that at our core we can be primitive beings. In 2007 Cronenberg presented Eastern Promises, which dealt largely with Russian organised crime families and depicted how we can deceive ourselves and those we claim to love. A Danger Method sees Cronenberg examine sexual relationships and the genesis of psychoanalysis through a unique take on the biographic film genre. A film which tackles indulgence, adultery and forbidden pleasure is clearly too delicious for David Cronenberg to miss out on but sadly it falls just short of the mark.

Biographical films, for me tend to fall into two categories; they either follow the entire life story of the protagonist, for example Ray, Walk the Line, La Vie En Rose and Milk or they can take a closer look at a specific time period/incident such as such as The Queen (tragedy of Princess Diane’s death) and Bobby (Assassination of Robert Kennedy). A Dangerous Method leans towards the latter as it focuses upon two relationships, firstly the relationship between Carl Jung and Sabina Spielrein (Keira Knightly) and secondly the relationship between Carl Jung (Michael Fassbender) and Sigmund Freud (Viggo Mortensen). We first meet Sabina Spielrein, a Russian mental patient as she is being forcefully committed into the care of Carl Jung. She is suffering from violent physical ticks and spasms the most noticeable of which causes her jaw to jut out at great discomfort. 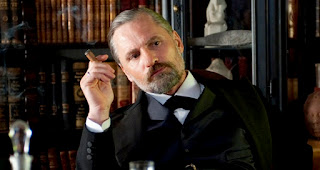 The line of the doctor patient relationship starts to get blurred when Jung starts to investigate Sabina’s sexuality and her sexual history. This leads to Jung contacting Sigmund Freud for advice and the two begin conversing on a wide range of topics from sexuality to dream interpretation. The two relationships grow and become intertwined as Carl Jung and Sabina start an affair. The problem for the film is that there aren’t any consequences for anyone’s actions. Despite the affair Jung still has several children with his wife and Freud and Jung seem to glide through their professional lives unscathed. Ultimately both relationships break down over time with little fallout which was disappointing because they were built up as if they held far more importance.

Despite this the cast is outstanding, led ably by Michael Fassbender who yet again has delivered a measured and charismatic performance. Viggo Mortensen is a genius. Once more he has immersed himself into the character so well it’s hard to see where the actor ends and the character begins. He is Freud, just as he was Aragorn and just as he was Nikolai in Eastern Promises. I believe we are truly blessed to have actors like Viggo Mortensen, Daniel Day Lewis and Javier Bardem in world cinema. Kiera Knightly is an intriguing actress, after appearing on the scene in Bend It like Beckham she has made excellent choices. She has aligned herself with the Pirates of the Caribbean series which gave her the opportunity to try more challenging roles in films such as in Domino, the Duchess and Never Let Me Go. The only disappointing aspect of this performance was the choice to have her do a Russian accent which came and went as it pleased. Vincent Cassel plays Otto Gross, a man hell bent on exploiting life for every sexual pleasure he can wring from it; a role which didn’t seem too much of a stretch for the French maestro. 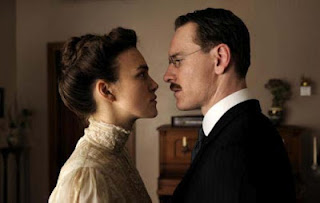 Nothing shocks in this film as it should. Sex is not shocking as it may have been in the time of Jung and Freud, sadly the film never really depicts why we should have been shocked by the scandalous behaviour on display. By modern standards where we are bombarded with sexual imagery we needed to see more than Carl Jung spanking Sabina for her arousal. This is not a bad film it just seems confused as to what it wants to be. It doesn’t do justice to the successful contributions that Jung and Freud made to psychoanalysis and nor does it explore sex in any new or enlightened way. I think this films needs to lie down on the couch and tell us a little bit more to fill in the gaps.