The latest in the DC Universe's string of animated feature films is Justice League: Doom which is inspired by the Mark Waid penned JLA: Tower of Babel from JLA #43-46. There are a number of differences between the book and the film but none that detract from the story, the core story remains and delivers the best DC Universe Animated Film yet.
"The Justice League consists of Earth’s finest super heroes and protectors of humanity. But in the mind of the Dark Knight, it contains potentially the most dangerous people on the planet. Over time, Batman has compiled top-secret contingency plans should any of them go rogue. When these files are stolen by a rising group of super villains, the Justice League embarks on a collision course that will test the very fabric of its alliance. With a stellar voice cast headed by Kevin Conroy, Tim Daly and Nathan Fillion, this thrilling DC Universe Animated Original adventure will challenge what you know about the Justice League as well as redefine what heroes are made of!"
The first thing that long time DC animation fans will notice is that Susan Eisenberg returns to the role of Wonder Woman, Nathan Fillion as Green Lantern, Tim Daly as Superman and Kevin Conroy as Batman... no, scratch that... Kevin Conroy IS Batman. These DC films have arrived at a point that not only is it the characters that make for a super team but the cast and crew in voice/casting director Andrea Romano (Batman: Year One, Batman Gotham Knight), director Lauren Montgomery (Superman Doomsday, Wonder Woman) and the late writer Dwayne McDuffie (All-Star Superman, Justice League: Crisis on Two Earths) who sadly passed last year.  They have arrived at a perfect location where everyone knows their job and perform pitch perfectly. 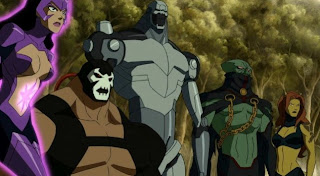 The supporting cast is just as great which is both a nod to legendary casting director Andrea Romano and to the cast themselves. Claudia Black (Stargate SG-1, Farscape) is an absolutely inspired choice as the voice of Cheetah, her raspy attitudinal voice is just as angry and wild as you'd expect from an animal lady. The animation quality is just as great, if not better than ever. One notable difference in art style is a slightly anime feel to the character designs. This isn't necessarily a bad thing but it did take some getting used to. I certainly don't frown on a stylistic change because it shows growth, we aren't stuck with the same blocky characters from Batman: The Animated Series (glorious as they were). The action sequences are fast, frenetic and beautifully animated. Each character smacks down in a way that would be expected by long time fans. 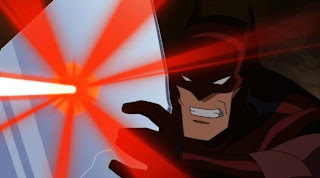 Justice League: Doom is available on DVD and Blu Ray and although I'm reviewing the DVD version, I would definitely recommend the BR version. The DVD quality is crisp and vivid but did contain a few digital artifacts and blocking that are reportedly absent from the Blu Ray version. Further to this, the sole "special feature" on the DVD version is a sneak peek at the next animated feature "Superman Vs The Elite" which is based on the Joe Kelly Story "What's So Funny About Truth, Justice and the American Way?" which was printed in Action Comics #775. The Blu Ray version, however, contains 3 featurettes, an audio commentary track, a digital version of JLA #43 and a couple of Justice League Unlimited episodes. For an almost negligible price difference you certainly get more bang for your buck. 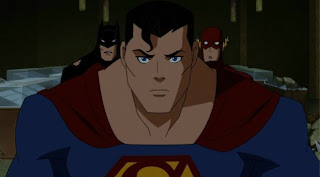 The only complaint that I can possibly find with Justice League: Doom is a complaint that I have with DC Animated Films in general, why do they have to be only 80 minutes long? 100 or even 90 minutes would be the perfect length and enable a story that felt less like a TV double episode and more like the feature film that it is. That said, the 80 minute barrier does make for a tightly bound script and constant action that makes for an electric viewing experience. Justice League: Doom is the best DC animated film to date and explores the relationships, trust and otherwise or the worlds most powerful beings. DC consistently nail each and every one of their films, a must see for all comic book fans.
Justice League: Doom is available now on DVD and Blu Ray.