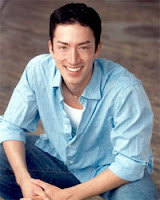 The anime voice over industry is a pretty tight one and many of the same names tend to pop up a fair bit. One such name is Todd Haberkorn, the voice of Takumi Nishijo in Chaos Head, , Italy in Hetalia, Android 19 in Dragon Ball Kai and Death the Kid and Natsu Dragneel in two of my new favourite new series Soul Eater and Fairy Tail.
So, how did this man of mystery make it into the industry? How does he approach the role of a fire breathing wizard and what life changing event will occur if he makes it to 100 episodes?
All of these questions and more will be answered after the jump!
Ryan: Can you give us a background on your ADR history? How did you get into the industry and what drew you to the field?
Todd: I've had the pleasure of working as a director, writer, and of course, voice actor with anime as well as other mediums such as theater, film, and music. I've been in the entertainment industry in general since I was a little guy in a musical called "Westward Ho!" I was a tiny cowboy that died on stage if memory serves. What drew me to the industry was the fact that even after hours and hours of being on set or in a rehearsal, I wasn't tired of the project I was working on. And the fact that I wanted to spend my free time absorbing everything related to the entertainment world and all its facets was intriguing as well; kinda tipped me off that this might be a life path for me.

Aside from voice work, what would be your ultimate job?
I want to play with the big dogs on the silver screen...hob nob with the likes of Brad Pitt and get a little Spielberg love :) Have a three picture franchise! That'd be cool!
Most recently we've heard you as the voice of Natsu, the main character from Fairy Tail. How has the Fairy Tail experience been?
I started off as a show like any other. But as i was working on the show more I saw the great boss fights, fantastical powers, and cool story lines - and I was hooked. I'm really drawn to the action adventure shows. Its been a blast. I only get scared when I lose my voice - which is often on that show.
Is is daunting to commit to a series that will stretch well past 100 episodes?
It isn't daunting as much as it is exciting if that happens. I think any actor wants the property their working on to go as long as possible. I hope we get there. but it takes the support of fans loving the show and more importantly, buying the show. That tells the companies producing it that folks like it and need to get to work on more!!

I have a very reliable source that tells me that you have something planned if you vreak the 100 episode mark. What exactly are you planning?
Well, if we dub 100 eps. (or 96 eps and the 2 OVA's), I plan on taking a field trip after the last session of the day. A funimation camera crew and I are going to go down to a local tattoo parlor and film the process of me getting my very first tattoo. Which will be Natsu's tattoo - what a cool story to tell when someone asks about the origin of that body art, eh?!
How many episodes have been completed so far?
So far we've done 48 episodes. If sales go well, we'll get the next batch and that will bring us to 96 I believe.
So in this respect, your fate is in the hands of the fans!
That's VERY true. I don't think fans realize how much power they have over the industry...if they like a show and buy it - we make more. For example, Hetalia. Folks went nuts for it and we dubbed everything that was available...and that was a direct response to the enthusiasm from the public.

Natsu isn't a terribly complicated character. He loves eating, sleeping, fighting and his guild. Do you think there is more to Natsu than meets the eye?
I think we see shades of it throughout the series and when other characters act as catalysts for more emotional breakthroughs for Natsu. There's the sadness he has with looking for his dad that really rips him apart inside. And he's fiercely loyal to his friends. From these origins spawns a lot of layers that I think each of the characters has and we the audience experience as we watch.
Have you managed to get your hands on any cool Fairy Tail gear?
I've received a lot of great Fairy Tail artwork and love in general. The fans have been really awesome! The Fairy Tail Podcast has been fantastic as well...their love for the show is infectious and they couldn't be nicer when I've interviewed with them in the past.
Are you at liberty to tell us about any upcoming projects?
There are several video games and upcoming anime I can't discuss- but you'll see it soon enough! As always, folks interested in more Haberkorn knowledge need to look no further than www.teamhaberkorn.com Its the official fan club site that holds your ticket to free anime, Toddcasts, Haberkorn swag, more! Plus, it supports The Acadiana Humane Society, a great non-profit animal shelter based in Louisiana.
Big thanks go to Todd and all of the lovely folks at Team Haberkorn.
Chaos Head, Dragon Ball Kai, Hetalia Axis Powers, Soul Eater and Fairy Tail are available now on Blu Ray and DVD from Madman.
Anime Chaos Head Dragon Ball Fairy Tail Interview Interviews Soul Eater Todd Haberkorn