For those who have instantly dismissed 21 Jump Street as a remake of an 80's property that, for better or worse, should have remained dead I say "hold up, home boy!". Well, maybe I wouldn't exactly say that but I would say that you should think twice. 21 Jump Street manages to deliver with tongue wholeheartedly in cheek. Unlike recent remakes such as Tron: Legacy, The A-Team and Clash of the Titans this film isn't trying to reinvent the wheel, to a certain extent it shows us the mindset of the current generation as opposed to the 21 Jump Streeters of yore.
In High School, Jenko (Channing Tatum) and Schmidt (Jonah Hill) were at opposite ends of the social spectrum. Jenko was the handsome chap that he is now and Schmidt... well... he was Jonah Hill. Although they were never friends in school, fate brought them together when they entered the Police Academy where our story begins. 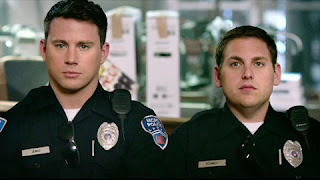 In identifying itself as a piss take, 21 Jump Street instantly endeared itself to my simple, simple mind. Ice Cube happily/angrily acknowledges that he is a stereotype whose sole purpose is to yell. I was almost disappointed when he didn't say "I want your badge an pistols!" or "I'm too old for this shit" while Nick Offerman confirms that 21 Jump Street, the Police Operation, is a rehashed and unimaginative last ditch grab by a bunch of desperately unimaginatively people. This kind of self deprecation helped to push aside the snarky cynicism that I am known and loved for, making way for enjoyment from beginning to end.
Although it could have been about 10 minutes shorter, 21 Jump Street delivers a very funny buddy cop film with some surprisingly hilarious performances. Most surprising was the fact that Channing Tatum is actually a very funny bloke! He brought forward a great physical performance and comedic timing to rival Jonah Hill, who in turn plays a much more grown up Jonah Hill. Hill seems to have grown up before our very eyes from an awkward and angry teen to who, I have no doubt, will become one of the big name comedians of our day. Further to this we also get great performances by Ellie Kempre, Chris Parnell and Rob Riggle. Overall you get a laugh a minute, most of which are pretty low brow but as Bridesmaids showed us last year, low brow can still be done well. 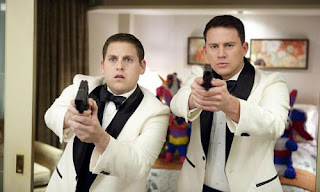 Cloudy with a Chance of Meatballs is without a doubt one of the funniest animated films that I have seen in years so it should come as no surprise that directors Phil Lord and Chris Miller perfectly balance surreal absurdity and silliness with just enough earnestness to keep from becoming a dick and fart fest. This praise should also be heaped on writers Jonah Hill and Scott Pilgrim Vs The World's Michael Baccall. Both the writers and directors came together to create a script that is as tight as it is funny.
We see Schmidt and Jenko re-enter high school, a place that has changed so much in the 7 years since they graduated and yet they manage to appreciate this strange new world where kids are conscientious and that Glee thing is cool. So if they can move on, so should we. After 25 years you can surely leave your judgements at the door and give 21 Jump Street a shot. It is without a doubt the funniest film of the year to date. It may not be an instant classic but 21 Jump Street absolutely nails every single gag.
21 Jump Street is in Cinemas Nationally from tomorrow.
21 Jump Street Channing Tatum Jonah Hill Movies Review Reviews