Music News - Tenacious D return in Rize of the Fenix 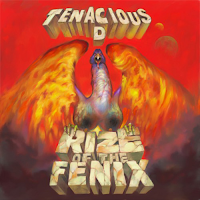 Creators of inward singing, face shredding Beezlebub slayers, the greatest band of all time... the D are back. If 2012 marks the end of the world you can be damn well sure that it will be due to a master exploder related incident at the hands of JB and KG.

In case you missed any of that, Jack Black and Kyle Gass return to our ear holes as Tenacious D in their new studio album, Rize of the Fenix. Long time compadre, Dave Grohl of Nirvana, Foo Fighters and Queens of the Stone age fame also returns as drummer on the new album which is due for release in Australia on May 11th.

Check out  hilarious promo clip and title track from the album after the jump!