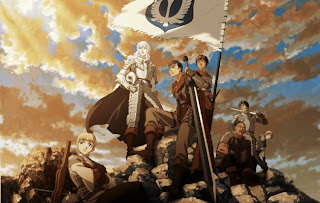 Berserk is one of the most brutal, violent and intesnse manga and anime series I've ever seen and now it is returning to screens thanks to Studio 4°C and Madman!

Guts is back and his thirst for blood is as insatiable as ever. Check out Madman's official press release after the jump!

MELBOURNE, Wednesday, 18 April, 2012: Madman is proud to announce it has acquired the Berserk: The Golden Age Arc anime feature films for distribution in Australia and New Zealand.

An epic action-adventure tale set against a dark, European-inspired medieval fantasy world, Berserk follows the story of Guts, a lone mercenary renowned for his ferocity and unmatched in battle - especially when armed with his imposing sword, a towering blade as tall as he. His destiny is to eventually become ‘The Black Swordsman’ and he will face untold horrors in battle.

In the first film of the ‘Golden Age Arc’ trilogy - The Egg of the King - Guts’ actions in combat capture the attention of Griffith, leader of the mercenary group ‘The Band of the Hawk’. Griffith soon moves to recruit Guts into their ranks, but despite a slew of victories and successes, Guts begins to questions Griffith’s true purpose, whose ambition may lead them both to a horrible fate.

Produced by the highly-respected Studio 4°C (Mind Game, Spriggan) and based on Kentaro Miura’s bestselling manga series, Berserk: The Golden Age Arc takes the much loved Berserk franchise into a bold and exciting new direction – with cutting edge animation, intricately detailed swordplay and a gripping storyline.

The Berserk manga series has consistently topped Japanese sales charts since it first hit shelves in the late 80s and has sold over 30 million copies worldwide. The original 1997 anime series is also still a long-time fan favourite.