Two months ago I reviewed the first collection of Fairy Tail on Blu Ray and a more glowing review I could never write. Thankfully the good people at Madman have already released the 2nd collection in no time and the 3rd is just around the corner!

"In the Kingdom of Fiore, powerful wizards make their living by joining magical guilds and contracting out their services to become "wizards for hire." Harnessing the forces of Dragon Fire, Ice, Weaponry, and the Zodiac, four young wizards of the infamous guild Fairy Tail team up to seek their fortunes. Growing stronger with every mission, they travel the countryside helping people and battling rival guilds, but with personalities as different as their magic skills, this team may end up doing more damage than good."


We rejoin our Fairy Tail friends as Gray battles a childhood friend and the rest of the gang attempt to free some island dwelling residents who have been transformed into demons. The action sequences in this series are certainly a high point and although plentiful, Fairy Tail offers so much more. 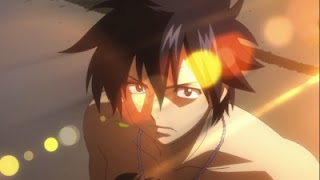 The absolute selling point for this series is the amount of heart that is injected into each and every one of the characters. Each of the characters has their own backstories and baggage that they bring to the guild. Instead of starting with a clean slate we have a cast that each have so much history to explore which gives a better understanding of their current motivations. In this sense, it feels as though we get to know the characters more than in certain other series. There are plenty of jokes along the way from just about every character on the roster so its not all high drama and character exploration, although, humour is yet another way of exploring the characters. Natsu may be a super powerful goof ball but when things get serious, he's the guild member that you would want at your side. 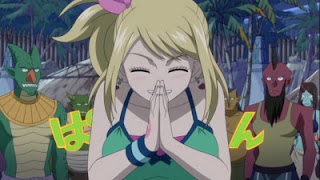 Obviously the animation quality is just as great as in the first collection. The character designs are exactly as in Hiro Mashima's manga as they should be. The animation is sharp and beautifully vivid, due in no small part to the high definition of a Blu Ray release. Considering that Madman's Blu Ray and DVD releases are exactly the same price, you'd have to be loco to go for the DVD option (unless you don't have a Blu Ray player... then you're forgiven). One slightly distracting element to the series is the use of CGI during fight scenes. When Gray, Gajeel or Natsu use their signature powers they give off a burst of magical light which is predominantly done with the use of CGI and although distracting, it isn't jarring. 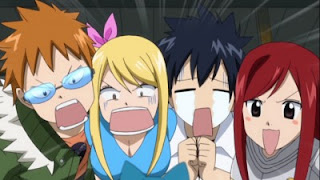 The Fairy Tail Manga is a consistently in the 10 top sales lists in Japan and America and it is easy to see why. I am completely up to date with the English manga releases of Fairy Tail, Naruto, Blue Exorcist, Bakuman and One Piece. Fairy Tail is head and shoulders above the rest in terms of enjoyability, it never fails to satisfy. Unfortunately it is often overlooked in favour of "the big three" in Naruto, One Piece and Bleach. If you haven't picked it up yourself, rest assured that you will not regret it. The Fairy Tail manga is every bit as enjoyable as this fantastic anime series.

Fairy Tail has made me regret the fact that I never jumped onto other animated series such as Dragon Ball, One Piece, Naruto or Bleach. Considering their popularity, there is no doubt that these are series worth watching and make me all the more regretful that I didn't get on board. With all of that regret aside, Fairy Tail is a fantastic series which has only just hit the market so it is the perfect time to get on board. Because I have enjoyed Fairy Tail so much, I have even been considering revisiting Madman's releases of Dragon Ball or Dragon Ball Z (I hear Dragon Ball Z Kai is super!). Fairy Tail is a brilliant anime series full of action, adventure, laughs and most importantly, heart.

Fairy Tail Collection 2 is available now on DVD and Blu Ray from Madman. Collection 1 is also available and Collections 3 and 4 are available for preorder. Just between you and me, I can't wait for the rest!
Anime Blu Ray DVD Fairy Tail Hiro Mashima Lucy Heartfilia Madman Natsu Review Reviews