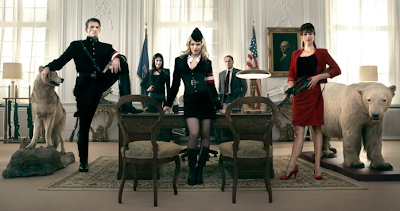 Sure, it doesn't exact look like the highest budget film out there but budget isn't everything. Described as a German-Finnish-Australian science-fiction comedy film (that's a whole lotta hyphens!)

Even with a modest budget this film looks like a blast of the tongue in cheek variety.

In the last moments of World War II, a secret Nazi space program evaded destruction by fleeing to the Dark Side of the Moon. During 70 years of utter secrecy, the Nazis construct a gigantic space fortress with a massive armada of flying saucers. Soon, this unstoppable attack fleet will swarm towards Earth, heralding the triumphant return of the Fourth Reich!