Movie Previews - Behind the Pirates

In cinemas tomorrow is the newest Aardman film, The Pirates! Band of Misfits in 3D.

"In The Pirates! Band of Misfits, Hugh Grant stars in his first animated role as the luxuriantly bearded Pirate Captain – a boundlessly enthusiastic, if somewhat less-than-successful, terror of the High Seas.  With a rag-tag crew at his side (Martin Freeman, Brendan Gleeson, Russell Tovey, and Ashley Jensen), and seemingly blind to the impossible odds stacked against him, the Captain has one dream: to beat his bitter rivals Black Bellamy (Jeremy Piven) and Cutlass Liz (Salma Hayek) to the much coveted Pirate Of The Year Award.  It’s a quest that takes our heroes from the shores of exotic Blood Island to the foggy streets of Victorian London.  Along the way they battle a diabolical queen (Imelda Staunton) and team up with a haplessly smitten young scientist (David Tennant), but never lose sight of what a pirate loves best: adventure!"

Pedigree alone should be enough to pique your interest but if you need even more, follow on after the jump to check out this all new behind the scenes featurette! YARGH! 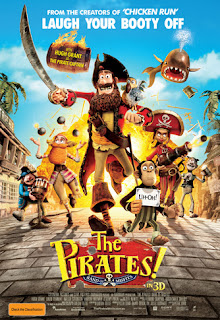