Review by Stu - The Lady 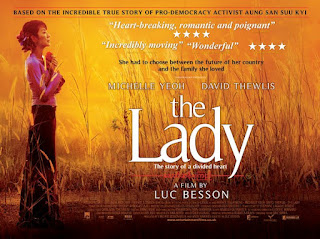 Oscar bait is a term often used when describing overly sentimental films and their nausea inducing trailers. You’ve seen these trailers before, they usually hit cinemas in the months prior to the major film festivals or, of course, the Oscars. Note the bombastic score, heavy themes and they mostly like to throw in a terminal illness or grand feat of the human spirit for good measure. Basically after seeing these films you just want to go home and reassess the meaningfulness of your life. Regrettably and frustratingly The Lady, the latest film by Luc Besson, has to be filed under this category. A film which should have been a beacon for hope and justice has sadly missed the mark so far that in a way it almost diminishes the true life events that the film is based upon, namely the life of Burma’s democratic leader Aung San Suu Kyi and her continual struggle against political oppression.

Rarely has a film opened on a more beautiful shot, that of a tiger perched on a cliff overlooking the dense jungle of Burma, followed by shots of elephants and temples and ultimately settling upon Aung San Suu Kyi as a child as she is being told a haunting tale by her father Aung San of how Burma became a land ravished by war and poverty at the hands of an imperial power. It’s a simple yet touching scene. It grounds the audience in a time and place and portrays Aung San as a loving father and patriotic man, fine qualities to start the story upon. We follow Aung San as he heads off to work, reluctantly leaving his young daughter at home. A short time later Aung San is assassinated whilst attempting to negotiate a democratic future for Burma. As an action sequence it was very straight forward, armed gun men storm a room and lay waste to the fifteen or so persons in it. My issue with the scene, however, is that it lacked any sense of subtlety or restraint. A far more effective way of portraying the violence would have been to show the gun men about to enter the room then cut away only leaving the sounds of gun shots and the scrambling of bodies. This would encourage the audience to imagine the violence which I suspect would be far more gruesome than anything presented on screen. It was a severe change in tone from that which opened the film and the first indication that Luc Besson was not going to handle the material correctly. 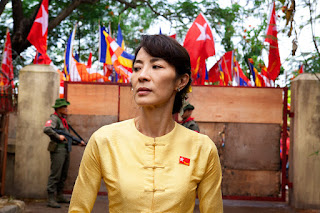 The film jumps in time and place to Oxford in 1998 where we meet Michael Aris (David Thewlis) as he is receiving news that he has prostate cancer and that he may not have long to live. It’s an interesting way to introduce a character to the audience; before we have had a chance to determine if we like him or not, we know at least that he is dying. I would argue that this reduces the impact of the illness as we have not had any time to interact with the character. We learn that Michael’s wife is currently in Burma and that he hasn’t seen her for three years. Without warning the film then jumps to 1988 and we are introduced to Aung San Suu Kyi who is now an adult and played by Michelle Yeoh and married to Michael, they have two children together. Aung San Suu Kyi’s mother sadly suffers a stroke and she is required to return to Burma. It’s at this stage that the film is split between life in Burma and Oxford.

Upon her arrival to Burma Aung San Suu Kyi witnesses the truly horrific acts being committed by the military and we are exposed to the paranoia of the ruling power, we see the network of people who are used to spy on the Burmese people, this is somewhat reminiscent of the themes which were explored in the 2006’s The Lives of Others. Once again there is the portrayal of the violence, which is played for shock, sadly I felt it was plagued by poor effects namely the blood on the victims looks too fake.

Aung San Suu Kyi returns to her childhood home to care for her mother and after a short time she is drawn into politics following in the footsteps of her father. The tone is upbeat and at times playful as Aung San Suu Kyi starts to gather supporters, this is contrasted against the cartoonish figures in the military government who would not be out of place in a cheesy 1980’s action film. In order to quash the support for Aung San Suu Kyi she is eventually the subject of house arrest. Which is basically the bulk of the film as Aung San Suu Kyi confined to her house with no telephone or television and the only connection with the outside world is a small radio. This should be claustrophobic and nerve racking but it’s just not. Michelle Yeoh is partially responsible for this, as strange as it sounds, she is almost too graceful and too measured for the role. She doesn’t really encapsulate the struggle of the circumstances, she always appears far too relaxed on screen and there is no sense of immediacy in her work. This period of the film is made up of Michael’s attempts to get the world to focus on Aung San Suu Kyi’s plight and we see what life is like for Aung San Suu Kyi in her confinement. Sadly they both distract from one another, I felt that both sides of the story were not treated with the respect that they should have commanded. 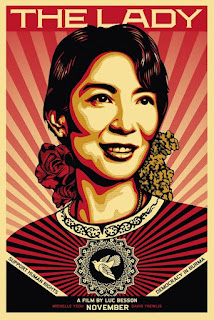 The biggest issue I had with this film is that given the subject matter it needed to have a far greater impact. The story is so compelling and Aung San Suu Kyi is a brave woman who has endured hardships the likes of which are almost unimaginable, except the film doesn’t express this in an effective manner. Yes we see the passage of time and the events are depicted, but there is no emotional gravity. The relationship between David Thewlis and Michelle Yeoh seems more realistic when they are on other sides of the world and very forced when they share the screen. The major focus of this film is on what is happening to their relationship and that of their children Kim and Alexander played by Jonathan Raggett and Jonathon Woodhouse respectively. The lack of chemistry between the family members really hurts the film and was quite distracting.

Perhaps it would have been more appropriate to make this film in a few more years when Aung San Suu Kyi’s story is completed. This story is still being played out in the media and there is a long way to go for Burma. As a biographical film the major plot points seemed glossed over which cheapen the experience. Sadly I felt this film provided no further insight into the issues Aung San Suu Kyi is facing and the plight of Burma. Best to just keep watching CNN and await updates.
Aung San Suu Kyi Burma David Thewlis Luc Besson Michelle Yeoh Movies Reviews The Lady