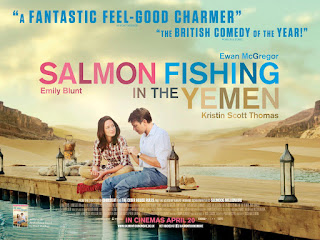 A cinema can be a funny old place at times, a collection of strangers gathered together to sit and gaze at a large silver screen, watching images flicker back and forth. Shrouded in darkness we share our emotions with people we will more than likely never meet and in most cases never see again. There is warming sensation that comes from this experience, almost a reassurance that there is still magic and excitement in our dreary commercial world. Salmon fishing in Yemen is a film which makes you fond of cinema, for its simplicity and earnest approach, a rare delight nowadays.


Based on the novel by Paul Torday, Salmon Fishing in Yemen is the heart felt story of Sheikh Muhammed (Amr Waked) as he sets out to develop sustainable salmon fisheries in Yemen. In order to achieve this, the Sheikh’s personal assistant Harriet (Emily Blunt) contacts Dr Alfred Jones (Ewan McGregor) who is one of the leading authorities on Salmon in the United Kingdom. Whilst sceptical at first Dr Jones eventually agrees to assist the project.

The always fantastic Kristin Scott Thomas plays Patricia Maxwell, the head of public relations for the British government who is working in partnership with the Sheikh in the operation to help bring a positive Middle Eastern story to the headlines. This film is predictable at times, which is by no means a criticism of it. It just has a fairly basic premise. The characters are well defined and it’s a pleasure to watch the story unfold. I rather enjoy romantic comedies when they are done well and in this case the film earns each emotional twist and turn. This is due in the most part to the chemistry between Ewan McGregor and Emily Blunt, it’s this relationship which carries the weight of the entire film, and we must believe their relationship or the film would never work.

It’s great to hear Ewan McGregor’s natural accent coming through, it made him seem relaxed on screen and far more genuine. The peculiar thing about Ewan McGregor’s character is the many nods to an iconic action hero by the same name, Dr Indiana Jones. There is a direct reference to finding the arc of the covenant, at one stage he uses his fishing rod in a whipping motion to disarm an assailant and nearly every character seemed to revel in referring to Alfred as Dr Jones. It all came across as a playful reference given the overall tone of the film. 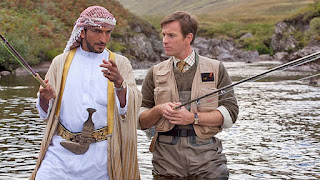 The cinematography is spectacular with some truly gorgeous imagery from the lush Scottish Highlands to the baron expanse of Yemen. This is matched beautifully with a score by Dario Marianelli (Jane Eyre, Atonement and V for Vendetta) which has at times a haunting quality which I felt underpinned the quieter moments of the film. Salmon Fishing in Yemen is a film which I think I will return to every now and then. It has a simple message of hope, faith and having the courage to chase a dream no matter how absurd it may first sound. This is a surprisingly entertaining light hearted film with some very touching moments, which is definitely worth casting a line out for.
Amr Waked Emily Blunt Ewan McGregor Movies Review Reviews Salmon Fishing in the Yemen