Anime News - Madmen, the Results are IN! 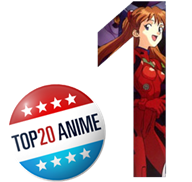 Back in March Australia's number 1 anime distributor, Madman, started taking votes for Australia's top 20 anime series of all time. Well Australia, your votes have been counted and the results are in.

As a thank you, Madman have also announced that all of the top 20 titles will be on sale so there's no reason to see what all the fuss if about!

Check out the official press release after the jump!

THE FANS HAVE SPOKEN: NEON GENESIS EVANGELION IS NUMBER ONE WITH A BULLET.

For the last two months, anime fans across the country have rallied together to cast their vote in Madman’s ‘Top 20 Anime’ titles of all time poll. Along the way, there have been laughs, tears and triumphs – but in the end, there can be only one to claim the top spot. As voted by the fan community, NEON GENESIS EVANGELION is the number one anime of all time.

For many modern day Australian fans, their passion for anime can be traced back to the moment NEON GENESIS EVANGELION first arrived on SBS in the ‘90s. It was their first step into a bold new world - one of epic science-fiction, deep philosophy, complex human relationships and, of course, awe-inspiring giant robot action. And to this day, it is still considered to be the series that broke the mould.

Now, it starts all over again with the EVANGELION series of reboot films, which not only bring the legacy to a new generation of viewers, but also take the story - which long-time fans know and love - into mind-blowing new territory.

Here’s what Tim Anderson, Madman founder and Managing Director had to say about NEON GENESIS EVANGELION: “This is the Madman-defining anime series. And still the only series I've ever watched more than once. Awesome.”