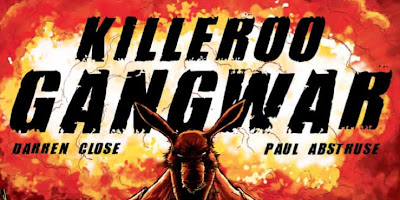 Every now and then I receive an email out of the blue asking if I would like to review a comic, generally independent comics, and generally titles that are brimming with heart. Not heart in the sense that they are touchy feely but heart in the sense that you can almost feel the blood, sweat and sleepless nights that these creators have put on the page, so is the feeling that I get from Killeroo: Gangwar.


"During the late 1970's and early 80's, there were two dominant motorcycle gangs that ruled the roads of the outback"

When I opened Killeroo, I was instantly hit with the feeling that I was reading a graphic novelisation of Mad Max 2: The Road Warrior. The voice of Harold Baigent was ringing in my ears, his opening monologue perfectly matched with the aesthetic put on the page by Paul Abstruse. The further I read the more I was convinced that this was in fact the love child of Mad Max and Tank Girl. Rufus, THE Killeroo, is a perfect blend of Mad Max Rockatansky and Booga.

Killeroo: Book One was originally released in 2003, a collection of artists and writers collaborated on the piece and eventually went onto work for some of the big guns. Most notable, the cover was supplied by Ben Templesmith, the year after he made his worldwide debut as an artist on Todd McFarlane's Hellspawn and of course, 30 Days of Night.

Darren Close has approached this book in a novel way, instead of having the characters tell the story he had a nameless, faceless narrator set the scene and establish the mythos. This has proven to be a winning formula in films such as 300 and the aforementioned Road Warrior but a tool often overlooked in comic books. Not only did Darren create and write the story but he also inked, and partially toned, Paul's art. It's these small details that show how much love is on the page.

The artwork by Paul Abstruse is fantastic and worthy of the big leagues. In full black, white and grey, Paul manages to create a scene that is dark and moody without being bogged down in the darkness. A constant sense of movement reflects a for of artistic kinaesthesia that Paul brings to the page. Small pieces of Australiana such as the Redback Beer logo being used for the Redback gang. Overall his artwork was really, really great.

My only complaint about the books is that the lead character is a member of a bikie gang. This in itself makes it very difficult to feel any sort of empathy for him. I found that I honestly didn't care who got killed because, frankly, they were all bad guys. It is a fine line to walk when you create an anti-hero and unfortunately there was just too much anti and not enough hero.

I can't pass comment on the hard copy of the book because the version that I was sent was a PDF but from all accounts, the print quality is great and rivals any of the big publishers.

Killeroo: Gangland is available here or through your local comic book store. They may have to do some hunting to get their hands on it but it will certainly be worth it.