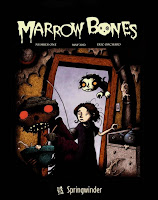 It is unreasonable and entirely unfair to review an independent comic book under the same conditions as one that was published by the big guys. Sure, the indie book will be less polished and probably of a lower quality in terms of packaging, but what you do get is so much more valuable. In an independent, creator-owned comic book, you get the true story that the creator wishes to tell, the story that has been mulling around in their head for years before finally oozing out of the nearest orifice, transforming into a beginning, middle and an end.

Eric Orchard is Marrowbones and Marrowbones he. He is the man who does the scratchy drawings that are cute and a tad spooky, until you look at them for too long and they become menacing, threatening.

On the surface of it, Eric Orchard's Marrowbones is a simple story about a young girl who works in a strange inn. Of course, in having the story introduced by a mechanical skeleton we are given fair warning as to what lunacy lies beneath. 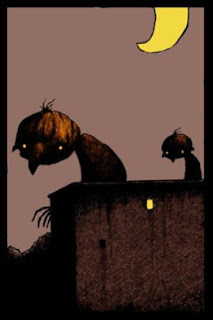 Marrowbones feels like beautiful a hybrid of The Graveyard Book and Mirrormask or what you'd expect from a Gaiman/Burton collaboration. Orchard manages to strike a brilliant balance between childish innocence and gothic macabre. Even the Brothers Gord, while looking like gangly pumpkins, maintain the menacing veil of Rien Poortvliet's Snotgurgle. Nora is our protagonist and anchor in a sea of madness. She counterbalances the strange and creepy by being immediately recognisable as a non-descript young (human) girl. There is nothing particularly horrifying about the story although upon deeper adult reflection, the extended cast are truly ghastly. This book somehow makes me, a 30 year old manchild feel uneasy yet in the hands of a child would be no more grim than Hipira: The Little Vampire.

I have long been a fan of Orchard's artwork and continue to be so, his ability to effortlessly merge innocence with a gothic aesthetic is a wonder to behold. The neutral palette gives a sense that the world of Marrowbones is in perpetual darkness, brown skies warn of impending dusk yet the sun never quite arrives. He has truly created a story, and accompanying artwork, that is worthy of a professional release. That said, an independent release allows many freedoms that an established publisher would not, unfettered by the needs of advertising, target audiences and pony tail related things. We get interlocking tales of an over-arching story which is a drop in the ocean of a world just introduced. Orchard does a great job of keeping just enough in the shadows to keep you guessing as to what will rear its ugly head in issue 2. He really has created a rich world in just a few short pages. 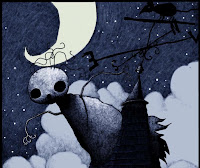 I find it very difficult to criticise Marrowbones and any criticism would feel petty. The dialogue at times felt a little loose and didn't always find it's rhythm and the font used for Ollie's dialogue was difficuly to read on a digital format. This isn't itself a criticism, just more of a selfish wish to hold this story in my hands. A nice hard bound short story the likes of Archaia's quality print and binding would serve such justice to Orchard's beautiful all-ages-neo-gothic-funny-pages