The Dictator - Review by Stu

Ever since Borat burst onto the big screen in 2006, Sacha Baron Cohen has best been known for his offensive characters and shocking situational comedy. Borat was one of his many television personalities which he brought to a much broader audience with hilarious results. Few films have made me laugh as hard as the first time I saw Borat in the cinema. Sadly his latest film The Dictator does not have the charm or wit of his past efforts although is still an entertaining film.

The Dictator is directed by Larry Charles (Borat and Bruno) which explores the world of General Aladeen (Sacha Baron Cohen) who is the dictator of the small oil rich African nation of Waadeya. General Aladeen’s passions include taunting Israel, killing infidels and sleeping with trashy Hollywood actresses such as Megan Fox (perfect casting). General Aladeen indulges in every excess which is at his disposal which makes for some fun sight gags. Through a series of CNN style updates we learn that the world is at odds with General Aladeen due to his nuclear weapons program and his abuse of human rights. He is summoned to New York to speak directly to the United Nations in order to avoid economic sanctions. The majority of the film then deals with General Aladeen travelling to America and clashing with the democratic values of the west.

This film works in so many ways. It’s legitimately funny and as expected equal parts shocking and offensive. I often found myself shaking my head thinking surely you can’t say some of the things he gets away with. The film is unashamedly sexist, racist and downright inappropriate. So why’s this a good thing? Because as a political correct, softly spoken and over sensitive bunch that we’ve become we need someone who can make these kind of jokes because we’ve all told each other that we aren’t allowed to find this material funny when in fact it is very funny. Races are different, sexes are different and in these differences Sacha Baron Cohen is the master of making observations and holding up the mirror to us to make us realise just how funny and silly we can be.

Whilst General Aladeen is a fun character to engage with, the film suffers from its generic narrative, forced situations and predictable plot contrivances. From when the film moves to New York it is meant to span three days, although there is no sense of urgency or a time frame, the film just crams too much story into too short a time. It’s almost like the film makers were saying when in doubt give the audience more and hopefully something will stick. The film lacked direction in this sense; it meandered from Aladeen tirade to tirade. This isn’t enough when attempting to flesh out an entire film.

Sacha Baron Cohen is the type of actor who could most likely win an academy award if he really wanted to. As a performer he has immense courage and strong screen presence. As a comedian I put him in the same category as his countrymen Ricky Gervais and Russell Brand, intelligent men who know how to be offensive without drawing blood from their barbs. The character of Aladeen may have been far more satisfying to visit in a television environment during a skit program where we could just get 5 minute bursts instead of an hour and half in the cinema. 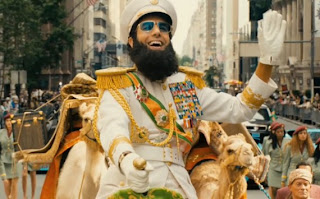