The original Voltron "Lion Force" series holds a special place in my heart. I have so many fond memories of weekday mornings before school, eating my Weet Bix and watching Voltron. Along with Transformers, Voltron figures littered my toy box. I had nearly the entire range of Panosh Place figures, each pilot and their respective lions as well as a plastic lunch box and a set of erasers that I refused to use for erasing.

Released in 2011, Voltron Force: The Defenders Trilogy is the first 3 episodes of the series edited into a feature length pilot. Taking place a few years after the events of the original series, Voltron Force feels entirely different to the source material, which is expected considering that over 25 years have elapsed since its release. One thing that is immediately obvious is that this is an American production unlike the original series which was based upon the Japanese series, Beast King GoLion.

"Several years after the final battle between the Voltron Force and Prince Lotor, a new evil threatens the galaxy, and the universe is once again in need of its true defender — Voltron Defender of the Universe!

The hardest thing about reviewing this series is removing the rose coloured glasses, seeing Voltron Force for what it is and not what I believe the original series to have been. My immediate reaction was to write a scathing review about how this is nothing like Voltron and a blight on my childhood memories. Sadly, my memories are just that. I haven't seen a single episode of the original Voltron in nearly two decades but if it is anything like Transformers Gen 1, it probably hasn't aged very well either. This isn't the original Voltron and I'm not a 5 year old Ryan, times change. 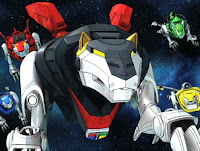 Voltron Force is produced by World Events Productions (WEP), the same company that originally brought Beast King GoLion to Western audiences. Suffice it to say that this quite obviously a labour of love and not just a blatant cash grab, too many years have passed and there are no other current properties for Voltron to be successful on name alone. They have put together a quality series which will undoubtedly win over an all new generation of fans. For us oldies, there are plenty of nods to the original series, and in turn, our childhoods. For the young pups, the children of now grown geeks, Voltron Force is a fun and well animated series that has most of the hallmarks of its namesake and barely any of the cheese factor.

The storyline is strong and not particularly complicated. Kids are incredibly astute at filling in the blanks where an adult would flounder, they will have no problem picking up where the last series left off. The animation quality wavers slightly and the CGI used for the Lions feels clunky at times. The CGI noticeably stands out against the traditionally animated background but was at least cel shaded which significantly lessens the blow. The voice acting in this series was a massive surprise package, a great cast graces the screen and instantly find their voices. Notable cast members include Vincent Tong (Iron Man: Armored Adventures), Mark Hildreth (The Tudors) and Samuel Vincent (Gundam 00). These actors, in fact all of the cast, bring a tonne of experience and skill to the table.

It is easy to poo-poo Voltron Force purely because "it could never be good as the original" but in all honesty, this is a perfectly enjoyable series for a new generation. If you're too hung up on the old to enjoy the new, you could always just buy the old series as well! Locally, Beyond Home Entertainment have released the lot!