What to Expect When You're Expecting - Review by Stu

Forget Harry Potter. Move over Lord of the Rings. The definitive book-to-film adaptation of our generation has finally arrived. Okay, so perhaps I’m a bit heavy-on with the sarcasm, but the concept of transmuting a self-help book, no less, into a fictional, montage-style, feel good comedy leaves me a little bewildered. Sharon Mazel and Heidi Murkoff’s self help book What to Expect When You’re Expecting which has no doubt guided millions of women through the minefield which is pregnancy, its longevity is testimony to this fact. This does not mean that it will necessarily make for an entertaining film.

What to Expect When You’re Expecting follows five couples as they experience the challenges and joys of pregnancy and impending parenthood, examining issues of unexpected pregnancies, miscarriages, work/life balance, love and adoption clearly gleaned from the book in a nominal fashion. Each couple is introduced to us immediately in the film through a series of brief scenes which basically gives us everything we would need to know about them to get through the story. This is never an easy task when juggling so many plot lines as characters can be overlooked or left under developed. Whilst there isn’t a great deal of depth to each character, the film does achieve a satisfactory arc of personal growth/resolution for its main protagonists.

All that being said, What to Expect When You’re Expecting only has a few saving graces. Elizabeth Banks proves yet again that she has great comic timing and a smile that can light up the screen in stark contradiction to Cameron Diaz - who looks as though she has enjoyed one too many trips to the surgeon’s chair. Jennifer Lopez shines as the emotional core of the film. I always forget how personable she is on screen and long for her to return to roles which have more substance. Films like Steven Soderbergh’s Out of Sight (1998) and Oliver Stone’s U Turn (1997) suited her perfectly. Since then she sadly hasn’t been involved in many films that have shown off her unsung (excuse the pun) acting abilities. Apart from these two actresses the only other highlights include Chris Rock playing a father of four who leads a group for newbie dads, with a Fight Club nod that the few blokes in the audience will appreciate: the first rule of daddy walk is... 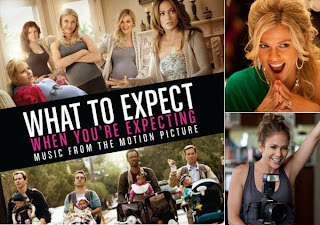 The biggest disappointment of the film is the direction. The film is directed by Kirk Jones who made the delightfully charming film Waking Ned Devine (1998). His style is completely washed out in this film. Granted this is largely due to the subject matter and because the story continually flits between storylines, which never allows the scenes to breathe. The style just felt like point and shoot for the most part - rather unimaginative. The screenplay was written by Heather Hach and Shauna Cross whose limited screen writing experience unfortunately showed in the end product. The script was, at times, predictable and jokes simply fell flat.

I believe the film would have worked better if it focused on just one couple at the centre of the story and instead allowed them to encounter other people having different experiences. It’s much easier to engage with one couple rather than five. Also the film may have been more effective if it had chapters or followed the format of the book. Whilst the film is only meant to be a romantic feel-good comedy and in no way am I suggesting that the film should act as a self help guide for expecting parents, I would have liked a reference to either the book or why it has been such a success. As the film stands now it portrays four couples who are having children without the assistance of the very book which the film is based upon. What’s next - Michael Bay to direct Windows for Dummies?
2012 amir Talai Anna Kendrick Brooklyn Decker Cameron Diaz Chris Rock Dennis Quaid Elizabeth Banks Jennifer Lopez Kirk Jones Matthew Morrison Movies Rebel Wilson Review Self help book