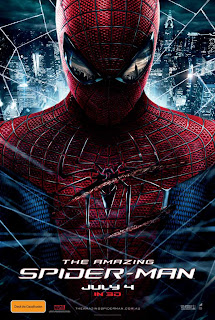 Hey there web-heads! As any good geek knows, The Amazing Spider-Man is due to swing into Australian theatres on July 4th and to celebrate, we have 10 in-season double passes to give away!


"The Amazing Spider-Man is the story of Peter Parker (Garfield), an outcast high schooler who was abandoned by his parents as a boy, leaving him to be raised by his Uncle Ben (Sheen) and Aunt May (Field). Like most teenagers, Peter is trying to figure out who he is and how he got to be the person he is today. Peter is also finding his way with his first high school crush, Gwen Stacy (Stone), and together, they struggle with love, commitment, and secrets. As Peter discovers a mysterious briefcase that belonged to his father, he begins a quest to understand his parents’ disappearance – leading him directly to Oscorp and the lab of Dr. Curt Connors (Ifans), his father’s former partner. As Spider-Man is set on a collision course with Connors’ alter-ego, The Lizard, Peter will make life-altering choices to use his powers and shape his destiny to become a hero."

All you have to do to get your hands on an in-season double pass is follow us on Twitter or like us on Facebook then fill out the form below and you are in the running!


THIS COMPETITION IS CLOSED AND THE WINNERS NOTIFIED

Competition closes at 11:59pm EST on Sunday the 1st of July 2012.
Your details will not be used in any way other than for the delivery of your prize. The Geek of Oz and Sony Pictures do not take any responsibility for the loss, damage or delay of/to prizes sent to winners (blame Australia Post for that one). The judges decision is final and no correspondence will be entered upon. Prizes are not redeemable for cash or any other kind of trading currency such as creds, latinum, sen, kan, zeni, double dollars or Ankh Morpork dollars. This competition is only open to Australian residents. Any questions or queries can be submitted through the comment section at the bottom of screen. Good luck!
Amazing Spiderman Andrew Garfield competition Competitions Emma Stone Marc Webb Spiderman The Amazing Spiderman