The second part to Madman's Supanova Sydney panel covered comic books and manga! While there weren't a great deal of acquisition or release announcements, Madman brought along a bunch of special guests to sweeten the deal.

Check out more details after the jump!

Before kicking off the panel proper, Dan Chlebowszyk and Sylvester Ip attended to some housekeeping:

- Fullmetal Alchemist vol 27, the grand finale, is now available!
- Other June manga releases include Blue Exorcist vol 7 and Vampire Knight 15.
- From September, releases of Bleach will be expedited to catch up with the US.
- A reminder that Skybound books, R. Kirkman's baby, are available from Madman.
- A man with animal paws held up a copy of The Deep. Yeah, that really happened.

The chat was intimate and adhoc, Taylor, Constant, Read, Chan and Yunyu all regaled us with off the cuff stories about their creative processes current works. A phone began to ring in the auditorium followed by the phones owner answering. She started to have a wee chat before walking out into the door way, continuing to have a chin wag. Taylor, smelling an opportunity for cheekiness, managed to convince the entire crowd to say "HI MUM!" at the top of their voices. Damn, that guy can work a crowd.

Conversation turned to the differences between working with writer/artists and those who purely work as artists. Taylor stated that his background as an award winning playwright helped him to think like a director, supplying a full script of both dialogue and panel layouts for the artist while Chan claimed that, at times, writers can need guidance as to what will, and won't, work on the page. As my Spider-sense started to tingle, Taylor conceded that he loves to work with an artist who can add to his stories and that he is always open to interpretation and addition also stating that The Deep: Here Be Dragons wouldn't be the same if it weren't for James Brouwer's input and additional (at times up to 4 per page) panels.

A question from the floor came from a lady who hadn't looked up at the panel once, instead focussed intently on her knitting. She asked how to get a story published in long form, skipping the need for short stories. The entire panel politely disagreed and stated that short stories are the perfect starting point, a way to hone your skills, a writers whet stone. Constant then tells of how Torn took up 4 years of his life before its current physical manifestation and it all began with an 8 page short story. Taylor then says "it is a skill to tell a complete story in 8 pages", a fact that seems to be lost on many budding writers. Size isn't everything. Read then takes the mic and tells us about his 10 years as a writer in the Australian comic industry, as a journo, The Eldritch Kid and his upcoming Gestalt book - Unmasked. He may look like an Eastern European gangster but he is one hell of a comic writer. Feel free to quote me in saying that Christian Read is Australia's Warren Ellis.

The panel was wrapped up with a group game of jan-ken-pon against Tom Taylor with 2 winners taking away a signed copy of Torn and The Eldritch Kid. The Deep, however, was graciously given to the animal pawed man... who had nearly finished the book anyway. 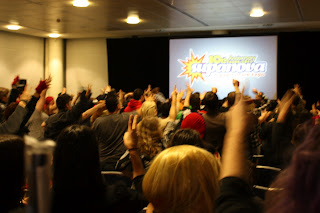