At todays Sydney Manga and Anime Show (SMASH!), Hanabee gave the crowd a quick run down of what's to come from Australia's newest anime company.

Company President Eric Cherry and Brand Manager Zi Yi Xie took turns in giving a glimpse into where they want the company to go while supporting and encouraging participation from the fans.

Disproving our hypothesis from yesterdays announcement on the release of Toradora, Hanabee will NOT be focussing purely on the Japanese language market. Eric Cherry stated "no, we will be looking at anything that warrants a release. If there is a dubbed version, we will go after that, but if there is no dub to come we will release what is available. We want to give the fans the titles that they want regardless of what language it is in."

He and Zi went on to explain that the company homepage will be officially launched around October 2012 and will be home to information, sales, business 2 business and streaming content although hinted at the fact that the streaming is expected to be based on a subscription service. 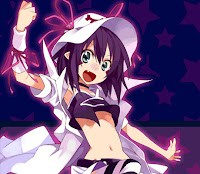 On to the acquisition announcement and set for release on the 3rd of October is Dream Eater Merry (夢喰いメリー) and will get a DVD release with both Japanese and English dubs for $49.99. I'm assuming that this will be a transfer from Sentai Filmworks and if so, it will be rather light on special features.

"Sometimes daydreaming can get you into trouble, but what do you do when it’s OTHER people’s dreams that you have to watch out for? For the last ten years Yumeji Fujiwara’s life has been getting progressively stranger, beginning with the sudden ability to predict what kind of dreams other people will have! Then, his own dreams take a bizarre turn in which he’s being pursued by armies of cats. Now, the weird-o-meter has just maxed out: Not only has Yumeji learned that the leader of the dream cats needs Yumeji’s body to access the Real World, but a beautiful girl suddenly drops on top of him and announces that she’s a Dream Demon who needs to return to HER world! The fabric that separates reality and fantasy is torn to shreds, and Yumeji has a lot of sleepless nights ahead of him as he has to deal with both the dream stalking and a dream walking in DREAM EATER MERRY!" - Sentai Filmworks

Next up was the announcement that Season 10 of Red Vs Blue, the series formerly distributed by Siren, will be their first Blu Ray release and will also see a HUGE box set release which encompasses all 10 seasons in one cool box.

The crew then went on to state that they have a number of other releases all but confirmed but were hesitant to announce contracts are signed.
Anime Dream Eater Merry hanabee News Red Vs Blue smash sydney manga and anime show