Now we all know Matthew McConaughey likes to take his shirt off on screen (and frequently off it too – if the trash mag pics are anything to go by), so it wasn’t a huge suspension of disbelief to watch him in Magic Mike – a film about male strippers. The tone of this film is set from the very first scene where Sheriff McConaughey is standing on a stage appropriately dressed in a leather vest and matching pants, dictating the provocative ‘house rules’ to a room full of ecstatic women. It’s fun, cheeky, shallow and entertaining, but leaves you with a vague sense of discomfort.

Magic Mike peers into the world of a Tampa Bay, all-male dance revue, led by Dallas (Matthew McConaughey), who looks right at home in a variety of revealing costumes and outfits. McConaughey is in his element in this film, and whilst he is obviously still in peak condition physically, he conveys a sense of weariness and alarm as if all the young bucks are starting to circle him – perhaps a case of art imitating life? The star of the film and title character is Mike (Channing Tatum), a 30-year-old stripper who is looking to start a new career sans gyrations and g-strings. Mike meets 19-year-old Adam (Alex Pettyfer) on a ‘day job’ construction site and introduces the young man into the alluring world of stripping and its accompanying lifestyle of unchecked hedonism. Shortly after, Mike meets Adam’s disapproving sister Brooke (Cody Horn), and the stage is set for a well-worn tale of temptation and redemption (just whose you’ll have to watch for yourself), with all the sex, drugs and nudity you can handle.

It wasn’t exactly clear what this film wanted to be; at times it played up the comedic elements to great effect and then attempted to plunge into drama the very next scene, in order to portray the dangers of living large in stark clarity. However these are young, good-looking guys who dance on a stage for over-excited housewives and hens parties – they aren’t exactly the moral compasses you’d want on an expedition through life’s challenges. A better example of this type of film would have to be Darren Aronofsky’s The Wrestler. 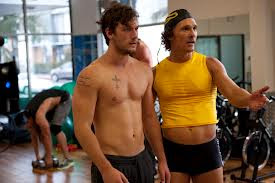 Once more, Steven Soderbergh reaches into his bag of usual tricks, comprising of colour filters (which gave a beautiful yellow and orange glow to scenes), interesting camera angles, handheld shots and “candid” dialogue that works in giving the film some momentary realism. His direction gives each of the scenes a laid-back feel, allowing the script to do its job. I have always admired Steven Soderbergh’s films, from Out of Sight to Traffic and even Oceans 11. It’s the fact that he’s constantly trying new and varied projects which is highly commendable.

Without doubt the biggest appeal of Magic Mike is the dancing. That’s right folks - male stripping can be fun to watch. Channing Tatum is an unbelievable dancer and he is supported very well by the other performers. Funnily enough, this film also stars Kevin Nash who is best known for his exploits in the professional wrestling industry in America. It’s fair to say that he is not the most graceful of dancers, and gets caught once or twice looking at his feet, however it does draw a cheeky parallel between the strippers in their skimpy underwear with their choreographed dance moves and American wrestlers and their equally staged moves … but I digress. Tatum, who actually worked as a stripper prior to acting, demands attention on stage and pulls off some phenomenal moves. The dance sequences are fairly tongue-in-cheek and revolve around the basic checklist for cliché female fantasies – we have a fireman, soldier, cowboy, policeman and even the king of the jungle himself, Tarzan. Unlike female strip clubs, the male stripping portrayed in the film, for all its mock sex acts and barely-there underwear, doesn’t seem to have that seedy element attached to it. The female audience gets that it’s all fun and games and not necessarily about sexual gratification.

Ultimately Magic Mike is a film about choice and responsibility, with some eye candy thrown in for good measure. As smaller films go, it was thoroughly enjoyable without having too much substance to it. Feel free to put a dollar bill in the g-string of this film, sit back and enjoy the show.
Alex Pettyfer Channing Tatum Magic Mike Matthew McConaughey movie Movies Review Reviews Steven Soderbergh