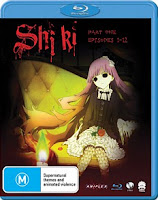 Pop culture has been awash with horror tropes in recent years. Whether it be zombie infestations or sparkly vampire families, horror sells. So it should be no surprise that it has found its way to the anime industry. Realistically, however, this is nothing new and horror has been a prevalent part of Japanese  culture dating back as far as the Heian period.

Siren Visual are doing their part to bring j-horror to our shores giving us, Shiki, a kaidan for todays generation.

"From the studio that brought you Black Butler and Fullmetal Alchemist emerges the psychological thriller that will send you to bed with a cross in hand.

When citizens of a secluded village begin dying off in alarming numbers, the sole hospital's head doctor tries desperately to save his patients-but his efforts are in vain.

Entire families are wiped out while others desert their homes. All hell breaks loose as the villagers discover their loved ones' corpses are rising from the grave with an insatiable thirst for human blood.

Haunting, hallucinogenic and unnerving to the core, Shiki stares into the hearts of both the hunter and the hunted. Who is safe when the urge to kill in order to survive blurs the line between man and monster?"

When it comes to horror, I unashamedly state that Japan does it best. There is something to be said for the subtlety of j-horror, the slow burn of The Ring and general creepiness of The Grudge are utilized without resorting to guts and gore. Of course, there are exceptions to this statement especially in the reasonably recent emergence of Japsploitation films such as Tokyo Gore Police and Machine Girl. Shiki manages to walk the line between the two by delivering an overarching uneasiness that permeates the entire storyline. While the subtlety of horror slowly builds it almost always results in a small amount of blood or gore, as a small payoff to loyal viewers.

The animation quality of Shiki is undoubtedly a strong point. Aniplex (Angel Beats, Durarara!!) have proven time and time again that they are capable of beautiful and original animation and Shiki is no exception. The thick outlines and ghoulish colour palette are slowly phased in following the more realistic "real world" build up. Not only is this aesthetically pleasing but it also shows that slowly but surely, we are venturing further down the rabbit hole. The character designs have somewhat of a shojo feel which is almost reminiscent of those used in Vampire Knight.

The story at times feels slightly convoluted with a huge cast of characters and a few false plot points that are focussed on for slightly too long. As they have never been released in an English translation, it is impossible to tell whether or not the same issues are found in the original novel or manga series by Fuyumi Ono. Although the cast of characters is exceedingly large, each person introduced is, for the most part, integral to the overall plot - just don't get too attached. While speckled with horror themes of Christian origin, Shiki also manages to inject an amount of Buddhist mysticism and Japan-centric symbolism through nods to obake, such as the noppera-ba (Faceless Woman).

This is yet another fantastic noitaminA release from Siren to sit along such other brilliant works like Usagi Drop and House of Five Leaves. Shiki delivers a well balanced story mixed with a healthy dose of Japanese horror without resorting to cheap frights and gore. While a slow burn, Shiki really hits its stride towards the end of Part 1, just in time to leave me wanting more. Siren's Blu Ray transfer of Funimation's original release is faultless, the picture is sharp and free of artefacts while the colour simply pops! To further cement their position as the anime horror masters, Siren have also announced that they will be releasing Ayakashi Samurai Horror Tales in early 2013.

Shiki part 1 is available for preorder on Blu Ray and DVD now and is set for release on the 23rd of August.
Anime Horror j horror Review Reviews Shiki Siren Siren Visual Vampire