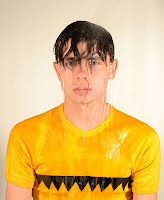 Good grief Charlie Brown! The off-broadway hit Dog Sees God: Confessions of a Teenage Blockhead has come to Newtown’s King Street Theatre, to show us what happens when the kids from Charles M Shultz’s Peanuts comic strip grow up and face the challenges of adolescence. It’s the characters we know and love, but with lashings of sex, drugs, violence and teenage angst, resulting in a mixed but competent production.

Dog Sees God: Confessions of a Teenage Blockhead uses visual clues and memory-testing references to identify the audience with the grown-up incarnations of the Peanuts characters. The play opens, fittingly, with Charlie Brown, re-titled “CB”, in his signature zig-zagged t-shirt giving an emotional address about the recent death of his rabid dog, that we know to be the ubiquitous Snoopy. It’s a sad way for Snoopy to throw off his canine coil and sets the tone for the rest of the play. CB gives us a guided tour of his world and introduces us to each of the other characters as he shares his grief and searches for answers to life’s bigger questions. We soon learn that CB is surrounded by a collection of quirky, self-indulgent and slightly damaged friends who are dealing with their own issues.

Whilst it’s a great premise for a story, the play suffers from somewhat of an identity crisis in that it flits between camp and dramatically hard-hitting but never quite seems to achieve either. Partly this is because the “big issues” it attempts to treat, including mental health, drug abuse, bullying and homosexuality, sound like the thematic checklist for a high school student’s creative writing exercise – a little over-used and tired. There are however, some true whimsical gems in the script, if at times it is a little over-reliant on character in-jokes. There is an inherent danger when playing with someone else’s creation in that you may alienate anyone who remembers the original material and at the same time not engage with an audience who aren’t familiar with it.

With regard to this particular production, the casting was spot-on and showcased some impressive performances by some of Australia’s new breed of theatre actors. At times the dialogue was a little stilted, breaking the dramatic flow, but by and large it was a commendable effort. The simple but quirky set design and the unobtrusive direction are entirely suitable to the personality of the play. There are more than a few laughs, and this production certainly made the most of the material. Whilst not flawless, I found myself rather enjoying my foray back into Charlie Brown’s neurotic and darkly humourous world.