Good grief! The Peanuts Kids are all grown up in Dog Sees God 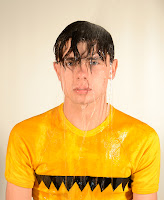 Sure, we're generally not known for our coverage of off-Broadway work but in this instance, we make an exception. Dog Sees God: Confessions of a Teenage Blockhead is an award winning off-Broadway work which is not only based upon Charles M. Schultz' much loved comic Peanuts but it is also the brainchild of Bert V. Royal, the man behind the very funny film, Easy A.


Be sure and check back soon for Stu's review of the opening night performance but in the meantime, check out all of the details and a teaser trailer after the jump!


The Actors Assembly presents the Sydney premiere of
DOG SEES GOD:
Confessions of a Teenage Blockhead
By Bert V. Royal

"Good grief! The Peanuts kids have finally come out of their shells." —Time Out NY.

The Actors Assembly is delighted to present the Sydney premiere of award-winning Off-Broadway hit, DOG SEES GOD, an “unauthorised parody” of the cutest comic-strip kids with everyone’s favourite talking dog by Bert V. Royal, who is best known for 2010 teen film Easy A.

Wild, hilarious, raunchy and starkly relevant, DOG SEES GOD is a striking portrait of adolescent debauchery and the seeming inevitability of self-destruction.
When CB's dog dies from rabies, he begins to question the existence of an afterlife. His best friend is too stoned to provide any coherent speculation, his sister has gone goth, his ex has been institutionalized, and his other friends are too inebriated to give him any sort of solace.

But a chance meeting with an artistic kid, the target of this group's bullying, offers CB a peace of mind and sets in motion a friendship that will push teen angst to the very limits.
Drug use, suicide, eating disorders, teen violence, rebellion and sexual identity collide and careen toward an ending that's both haunting and hopeful.

Co-director David Cuthbertson was drawn to the play when he saw its Off-Broadway premiere in New York, in 2005.

“I was just so struck by how Bert V. Royal captured the rawness of the teenage condition,” says Cuthbertson.

“You have this bunch of lovable comic-book pals that we’ve all grown up with, and then to see them become these fully-fledged, hormonal humans—hilarious, yes, but monstrous, pushing each other further and further away—it’s a tragedy! It’s wonderful to have your audience in stitches, but when you have them thinking about it for days, engaging in a dialogue, perhaps on the recent spate of alcohol-fuelled violence in the Cross, that’s when you know that you’ve done your job. That theatre is doing its job.”