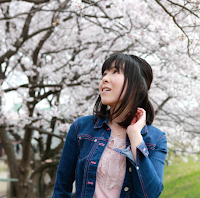 Although best known in anime circles for supplying the voice of Sakura Kinomoto in Cardcaptor Sakura and Kozue Izumi in Infinite Ryvius, Sakura Tange (丹下 桜) is also a prolific musician with a whole swag of albums under her belt, many of which are now available to Australian fans on iTunes!

At the recent Sydney Manga and Anime Show (SMASH!), I had the chance to speak to Tange-san about her career as a voice actress, a musician and her reaction to Australian anime fans.

Check out the full, translated and transcribed interview after the jump!

Ryan: Many Australian fans may not realise this but, although you are well known for your anime roles you are very successful as a pop idol.

Tange-san: Yes, I have produced a lot of CD's as well as my voice acting work and they are available fro everyone to download now!

How do the two lifestyles differ?

The main difference is that as a seiyuu (voice actor) I have to become someone else, I become the character. But when I create music, I can just be myself.

Which do you prefer?

I like both equally and for the roles that I play, I mostly do the singing for the character songs so I don’t think of them as separate.

What differences are there between your music fans and your anime fans?

They are basically the same but there was a period where I was only creating music so sometimes it all depends on when someone became a fan. Anime fans get more excited but once they learn that I make music they become a music fan as well. Most people become a fan of both in the end.

When voicing video game characters like Kasumi from Dead or Alive, does your throat get sore from all of the yelling and grunting?

During the battles and fight scenes, Kasumi is very harsh on my throat *laughs*. But I am very lucky that I have a strong voice, a strong coating on my throat.

As a singer and voice actress, your throat is your tool of the trade. Do you have any daily routines to look after your throat?

I drink a lot of ginger and honey tea because it is very good for your throat. I also try to keep my throat warm by wearing a scarf around my neck. In Japan, people often wear face masks to keep away pollen but people don't wear masks in Australia unless they are very sick so I had people come ask me "are you okay?". Wearing a mask is also good because it keeps all of the moisture in your throat.

Do you enjoy animation outside of your professional commitments?

Yes I do a check on the final product which is called an “on air check”. I see that you have Madoka on your phone! Mahoushoujo Madoka Magika is a really popular series isn’t it? I have collaborated with the voice actress of Madoka (Aoi Yuki). I really like the work of Hayao Miyazaki and it was My Neighbour Totoro and Kiki's Delivery Service that made me want to become a voice actress.

If you weren't a voice actor, what would be your ideal career?

When I was younger I thought that I wanted to be a reporter, you know, the kind that reports on the news from overseas. But as I grew older I noticed that I would have to go to places like the deep Amazon and decided that maybe it would be too harsh for me *laughs*. 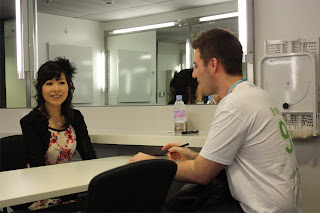 Are you enjoying your time in Australia?

This is my first time here and it is very nice. Even though it is a city, Sydney feels very much like a harbour. Yesterday I went up Sydney Tower and the city was so pretty.

And finally, how are the Australian fans treating you?

Even though there is a language barrier I can feel their hearts. That is what makes Australian and Japanese fans the same, they all feel the same in their hearts.

Thank you very much for speaking with me, it was wonderful to meet you.

It was nice to meet you too, all the best.

(Thanks go to the staff of SMASH! for organising the interview, Tange-san for speaking to me and also to her wonderful translator- without whom, this would not have been possible)
Anime Cardcaptor Sakura Interview Interviews Sakura Tange smash sydney manga and anime show