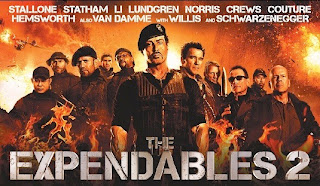 The Expendables 2 is a wank, a 103 minute long masturbatory session. The first Expendables film was a ludicrous testosterone filled gun fest and apparently, The Expendables have been on the juice since. The second outing in what is undoubtedly a burgeoning franchise is full of so much ham and cheese that it completely destroys any possible chance of being kosher on any level.


Simon West (Con Air, The Mechanic) helms the return of Barney Ross and crew in The Expendables 2. After a very messy deployment in Nepal, Mr Church (Bruce Willis) sends the team on a simple recovery mission before the dutiful revenge of a fallen comrade demands a smattering of murder.

Now, I have to admit, I did not enjoy The Expendables 2 but that said, I didn't enjoy the initial iteration either. It boggles the mind to think that so much money was spent on creating a B-Grade film. Although touted as being the ultimate A-Team of action superstars, only Jason Statham, Terry Crews and UFC fighter Randy Couture managed to provide performances that were in anyway complimentary to their "action star" titles, Statham was Statham and Crews was a badass version of Chris Rock's father. Unfortunately, all of the classic action heroes of yore were nothing but caricatures of their former selves. Stallone resembled Popeye after a cerebral embolism while Van Damme played a baddie reminiscent of Chris Cooper's in The Muppets (cue maniacal laugh). The best and most earnest of all performances was supplied by newcomer Liam Hemsworth. While providing a great performance, he also demonstrates his potential as a future action star in his own right.

Obviously this film is created with its protein powder covered tongue firmly in cheek and all of the cheese can be forgiven to an extent but the moments where an actual emotional response was required were handled poorly and suffered from what was an entirely ham-fisted script. For example, in a moment that could have given grounding to our muscle-bound super group, a character dies soon after proclaiming "I'm dying" then later in the film, Stallone mumbles his way through a monologue which included "we keep it light until it’s time to go dark, and then we get pitch-black". Sadly, that line aroused more laughter than many of the gags in the rest of the film. The rest of the gags were reliant on our heroes repeating their trademark catchphrases or variations of. This is, at first, entertaining although grows tiresome very quickly and will leave you thinking "I'm too old for this shit".

Not many elements of this film shine apart from the superstar cast which is impressive only for its body of work. There are more than a few gigantic plot holes left unattended while the use of CGI during action sequences was heavy handed and downright ugly. Further to this the film quality varied from crisp to grainy while many scenes were softly focussed in what I'm assuming was an attempt to hide hypodermic puncture marks from weekly botox injections.

Don't expect a single surprise from this film, it is exactly what you see from the trailer and very little more. The Expendables 2 is every bit a silly and over the top as The Expendables so if you didn't like the first, it is highly unlikely that you will like this. However, if you DID enjoy the first, The Expendables 2 will give you even more of the same and a little bit more, more action, more violence and more cheesy one liners from the cast of Hope Springs, I mean, Planet Hollywood shareholders, I mean The Expendables 2.