The Bourne Legacy - Review by Stu 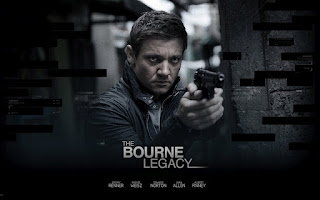 It’s been ten years since The Bourne Identity and it still stands as a fascinating piece of action film making. It achieved a marriage of compelling character drama with truly thrilling action. Think back to some of the more iconic scenes such as the Mini Cooper chase sequence through the narrow streets of Paris, Jason Bourne evading soldiers in the American embassy or the rooftop fight scene in Morocco. The signature features of the trilogy were the lightning quick editing, brutal hand-to-hand combat scenes and the aforementioned “on location” settings around the world. Add to that the immediate like-ability of Matt Damon as the lethal but affable protagonist and you have a winning combination. Jason Bourne wasn’t the bulky action hero of the 80s or the gun-toting cowboy of the 90s – he was the new and improved special agent, a man who uses his head more often than his fists. In a post 9/11 world he was the character the western world wanted, the result of which is a very entertaining film franchise that has yet to be surpassed in its genre.

Given the success of the Bourne franchise it was only a matter of time before they tried to revisit the material. Matt Damon politely declined the opportunity to reprise his role, allowing the mantle to be handed to the ever-brooding Jeremy Renner (The Hurt Locker, S.W.A.T). The Bourne Legacy takes place in and around the events of The Bourne Supremacy and The Bourne Ultimatum. This time we follow Aaron Cross (Renner), an agent in search for answers after he is double-crossed by his handlers. His mission takes him through government conspiracies, genetically engineered super soldiers and of course plenty of fast-paced action. Sadly, the film is bogged down in exposition and lacks the charm and personality which made its predecessors so watchable.

Not only is there a new lead but there has also been a swap in director, with Tony Gilroy talking the helm. Gilroy has written each of the Bourne films and once again returns as the screenwriter for this instalment. There is no denying that he is a brilliant screenwriter, we only need look at films like Michael Clayton to see how subtle his touches can be. As a director, however, he needs to show far more restraint and learn when to cut scenes shorter instead of beating the audience over the head with obvious plot points. The first hour of this film switches between long scenes without dialogue to confusing scenes of shadowy figures speaking in half sentences full of poorly disguised double talk. One feature of Gilroy’s screenwriting has always been getting the audience up to speed quickly and then letting the characters take over. Unfortunately he has appeared to abandon this approach and the film suffers as a result.

This film is like a James Bond movie without James Bond. It comes off as a cheap attempt to use the brand name to sell tickets. Just because the story is set in the same universe as Jason Bourne doesn’t make it instantly compelling. In this case the motivations for each of the characters are paper thin and at times just predictable. In the end I found myself not caring about anyone involved. The constant referencing of Jason Bourne only serves to highlight the lack of charisma of this offering and its reliance on its namesake predecessor. It made me wish I were watching a new Jason Bourne adventure and not a cheap and shabby re-boot.

Basically, but for the A-list cast, The Bourne Legacy feels like a straight-to-DVD movie that you’d find in the discount basket of your local video shop, right next to Honey I Paid for the Kids to Go to College and the fifteenth spin off of The Lion King. The state of this franchise is, strangely enough, summed up in a line from the film, “your people were given a Ferrari and you treated it like a lawn mower”. The very essence of what made this series great has been sucked dry and exploited for every last cent.