Comic News - 3 Titles to be Launched at FEC Extravaganza! 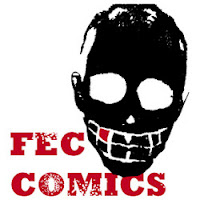 As you should know by now, we here at Geek of Oz love us some Aussie comics. So we feel it only fair that we spread the word on an upcoming comic book event that should not be missed!

Melbourne based publishing house FEC COMICS is holding a massive extravaganza to launch 3 of their newest titles. So, for all the details on a comic event that shouldn't be missed follow on after the jump!

On Saturday the 22nd of September 2012 the crew from FEC COMICS will be holding a massive launch for their 3 newest titles. So not only can you get your hands on the hottest new Australian titles, but you can also meet the creators, get your comics signed or sketched in and take part in a Q & A session. This is a great opportunity for fellow comic book geeks to get together and show their support for the Australian comic book community. Plus, you never know which other creators you might bump into! Further details can be found at the FEC COMICS FACEBOOK PAGE.

The titles being launched are:

By now you should all be familiar with Kranburn, but let’s indulge ourselves for a moment and introduce you to the comic:


95.5% of humanity is dead. All that is left are settlements dotted throughout the landscape. In this kill or be killed environment the peaceful settlement of Kranburn cannot continue to take the passive route when might equals right and a mad dictator to the north has every intention of destroying them.


BEN MICHAEL BYRNE! The very name causes your car to convert to diesel, your pet to eat its own head and your mother to swear backwards!

A horror anthology displaying the works of some talented local (mostly) folks.

When the other toddlers were eating crayons, Michael Wszelaki fought all urges to sample these delicious (and sometimes glitter-filled) waxy morsels, rebelliously putting them to paper instead. Now, many years on, his tools have been upgraded, but his love of drawing remains.

Billy Toumas is based in Sydney and has been an avid reader of comics from the ripe age of ten. He has an infinite amount of ideas going on in his head for stories and occasionally he writes them down for people to read.


Will Pleydon grew up in Western Sydney, studying Visual and Fine Arts, giving him a great chance to learn many facets of art. Comics and visual storytelling remain a great passion.


Andrew Shaw is a massive comic fan, much to his wife’s chagrin, he has always been fascinated by comic art. He has many other ideas bubbling away which he hopes to inflict on readers soon.

Seven is the story of a young woman, Katerin, who has been cursed to silence until she can free her brothers from a witch’s curse.
The Creator:

Alisha Jade makes comics from her Brisbane fortress. She will one day be found under piles of books and cats.