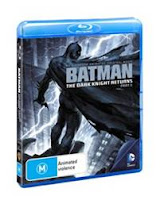 DC Universe Animated Original Movies are without a doubt the more polished and enjoyable of "the big 2" comic companies, so what happens when they take on one of the greatest superhero graphic novels of all time?

Legendary creator Frank Miller is one of many well known writers to give his own spin on the caped crusader but not many have created something so unique yet still instantly recognisable as Batman.

Batman: The Dark Knight Returns tells the story of a retired Batman. Worn out and middle aged he had hung up his cape and cowl only to be called again off the bench to fight an all new foe.

Hitting shelves (digital and physical) throughout Australia on October 3, Batman: The Dark Knight Returns Part 1 is sure to thrill Batfans old and new.

Check out all the details, special features, competition details and trailer after the jump!

In the bleak and ominous future of Batman: The Dark Knight Returns, Part 1, it’s been a decade since Bruce Wayne hung up his cape, following most of the other superheroes who had been forced into retirement. Facing the downside of middle age, a restless Bruce Wayne pacifies his frustration with race cars and liquor – but the Bat still beckons as he watches his city fall prey to gangs of barbaric criminals known as The Mutants.

The return of Harvey Dent as Two-Face finally prompts Wayne to once again don the Dark Knight’s cowl, and his dramatic capture of the villain returns him to crime-fighting – simultaneously making him the target of law enforcement and the new hope for a desolate Gotham City. Particularly inspired is a teenage girl named Carrie, who adopts the persona of Robin and ultimately saves Batman from a brutal attack by the Mutant leader. Armed with a new sidekick, and re-energized with a definitive purpose, the Dark Knight returns to protect Gotham from foes new ... and old.

“Frank Miller’s classic re-imagining of Batman has been faithfully recreated under Bruce Timm’s skilled guidance as a masterpiece of storytelling,” said Mary Ellen Thomas, Warner Home Video Vice President, Family & Animation Marketing and Partner Brands. “This story has been treated with great reverence, including a tour-de-force performance by science fiction legend Peter Weller as the voice of Batman. We know our fans will not only love this film as a stand-alone, but will clamour for the release of the second half next year.”

Also, if interested, you could head over to Empire's website where you could win tickets to an exclusive screening of the film in Sydney or a DC Animated prize pack!
animation Batman Batman The Dark Knight Returns Blu Ray dc DC Animated DVD Frank Miller movie Movies News trailer Warner Bros