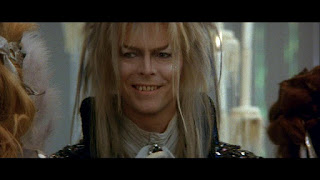 Loud electric guitar, disconcerting puppets and a rather impressive pants bulge can only mean one thing – the 80's classic film Labyrinth, which returned to the big screen last night as part of Cremorne Hayden Orpheum Theatre’s ‘I Love Retro’ series. It’s hard to beat watching a film so steeped in nostalgia when you’re in a cinema with six hundred fans all eagerly waiting to applaud each iconic moment.

Labyrinth may not be first class film-making, however it’s fair to say that it’s an ambitious piece of work which takes itself just seriously enough to work. I love the outlandish music, puppetry and visual effects. David Bowie is a delight to watch as the art-imitates-life embodiment of the villainous Goblin King, sporting more costume changes than a Lady Gaga concert. Even Jennifer Connelly has her moments as she transforms from petulant brat to petulant heroine. All the while, the action of the film is surrounded by an assortment of quirky characters and uniquely conceptualised creatures, which give the film life and excitement. Weighing in at a slight 97 minutes, the film wastes no time kicking into action, rarely stopping for exposition except to introduce new characters into the mix.

After revisiting this film it made me realise just how much I am missing puppets being used in movies. It’s a shame that the need for realism from computer-generated graphics has swept aside the artistry of puppeteering. Give me a battle filled with armour-clad goblin puppets any day of the week over endless tracking shots of faceless graphics running towards each other. (Anyone seen Troy recently?)

Sunday evenings in Cremorne are the need-to-be place for film lovers looking to revisit the beloved classics. Maybe they give us something modern film-making is missing or maybe we relish the opportunity to revisit our childhoods. Either way, its great to see theatres like Hayden Orpheum offering us the rare chance to see a time-tested favourite on the big screen, crank up some music and Dance, Magic Dance.

Forthcoming classics include a double feature of Risky Business and Sixteen Candles (Sunday 14 October at 6pm), Ghostbusters (28 October at 6:30pm), and Poltergeist with John Carpenter’s The Thing (November 4 at 6pm). Further details available at http://www.orpheum.com.au/special-events.