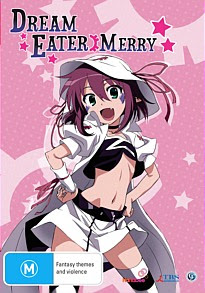 One of the first releases from Australia's newest anime company, Hanabee, is Dream Eater Merry. Based upon a manga series of the same name it is a psychological thrill ride that impresses in so many ways although would have benefited from more straightforward storytelling.

"Sometimes daydreaming can get you into trouble, but what do you do when it’s OTHER people’s dreams that you have to watch out for? For the last ten years Yumeji Fujiwara’s life has been getting progressively stranger, beginning with the sudden ability to predict what kind of dreams other people will have! Then, his own dreams take a bizarre turn in which he’s being pursued by armies of cats. Now, the weird-o-meter has just maxed out: Not only has Yumeji learned that the leader of the dream cats needs Yumeji’s body to access the Real World, but a beautiful girl suddenly drops on top of him and announces that she’s a Dream Demon who needs to return to HER world! The fabric that separates reality and fantasy is torn to shreds, and Yumeji has a lot of sleepless nights ahead of him as he has to deal with both the dream stalking and a dream walking in DREAM EATER MERRY!" - Sentai Filmworks

The storyline above sounds quite played out, and in recent years it would certainly seem so. Other series such as Puella Magi Madoka Magica and Black Rock Shooter both explored similar themes in terms of the dream state and alternate realms that run in parallel with, and have a detrimental impact on, our own. That said, Dream Eater Merry handles it well and delivers a series that, while not an instant classic, has managed to entertain and captivate from beginning to end.

The series starts by introducing a basic "monster of the week" style of framework in which our protagonists battle a constant influx of baddies each episode, culminating in an eventual showdown with the big bad bossman. While this is a somewhat apt description, the way in which is is handled is far better than most. While the big bad bossman in this case, John Doe, is introduced early in the piece, we are still treated to a number of different baddies each with their own individual character design. Much like Madoka Magica, each of the baddies are unique and bring with them a specific thematic design sensibilities. This in itself makes each episode, and each twist in the story feel fresh and exciting.

In terms of animation quality, studio J.C. Staff (who also animated Hanabee's other launch title Toradora!) have done a fantastic job. Fight animation is fluid, some of the moves that Merry pulls off are impossibly dynamic. While at times it seems frustrating that the story doesn't quite cut to the chase, the action sequences are a whole lot of fun.

The musical elements in the series, especially the opening theme by Marina Fujiwara, are extremely strong and set the tone for each storyline just as the tonal shift in art does. Unfortunately, it seems as though the Japanese audio track is far better balanced and highlights the background music. The english dub, however, seems to be a great deal more flat leaving the soundtrack somewhat unnoticeable.

This is a strong opening salvo from Australia's newest anime company and one can't help but feel excited for what's to come. While by no means an instant classic, Dream Eater Merry is a strong series whose only major fault is a slight lack of story progression. However overall the story, music and visual elements are all strong enough to make this a very entertaining, albeit far to short, series.