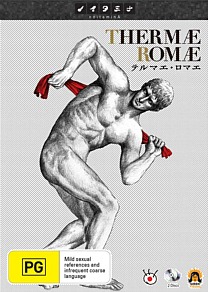 The anime industry has a tendency to take itself far too seriously, especially considering that at the end of the day, we're talking about cartoons. Thankfully, every now and then a series like Thermae Romae comes along and exerts humility through overt silliness and proves what should be blindingly obvious, anime should be fun.

In Rome in the year 128 AD, a Roman named Lucius Modestus is having trouble coming up with ideas for architecture. While contemplating in a bathhouse, he discovers a strange drain than sends him to a bathhouse in Modern Japan.

While confused by his surroundings, he becomes amazed by some of their innovations, such as fruit flavored milk. Taking these ideas back to Rome, he incorporates these ideas into a new bathhouse to great success.

A year later, Lucius is commissioned by a sickly man to build an outdoor bath near Vesuvius. While inspecting a heated well, Lucius is once again sent to modern Japan, this time winding up in a hot spring, where he gets to sample boiled eggs and sake!

After recently watching big budget anime films, best selling OVA and award winning series', it seems surprising that one of the most enjoyable viewing experiences would be at the hands of a modest anime series which isn't your traditional painstaking, computer or painted cel animation but instead uses Flash. That said, the animation quality isn't up to the standard that you may find in Black Rock Shooter or Dennou Coil, it's original and assists in highlighting the comedic elements in what is, without a doubt, one of the funniest series in recent years.

While the animation could simply be described as poor, it is quite obviously a conscious decision to supply such comedically terrible animation is in complete contrast to how serious and deadpan the main characters take themselves. This series seems to indicate a slight shift in the focus of the Noitamina Fuji TV programming block. Initially launching with titles such as Honey and Clover and Paradise Kiss, Noitamina had a strong focus on the adult market, broadcasting series that were not for kids and, in fact, contained themes that would be unsuitable for younger audiences. While Thermae Romae is extremely enjoyable for adults, even kids would enjoy its irreverent silliness and of the wall aesthetic although having only a Japanese dub may be a hindrance on that front.

Musically, it appears that costs have been kept down even further by using pieces that are public domain although still manage to create a generic feeling of history. Nothing says ye olde action sequence like Flight of the Valkyries. Again, these classical masterpieces create juxtaposition between the below par animation and musical works by some of histories greatest composers.

Having a Roman protagonist whose internal dialogue is in Japanese makes it difficult to compute when he doesn't understand the Japanese language. That said, it would be very difficult to handle one particular aspect of the storyline in any other language. Our man out of time, Lucius, is amazed by the Japanese when he first encounters them. Initially he believes that they must be part of a slave race before eventually referring to them as the "flat face clan". This in itself could come across as a great deal more offensive if spoken in English. In Japanese, however, it just sounds politically incorrect and enhances the comedic aspect of such scenes.

Thermae Romae is an extremely funny series that, while not exactly a visual treat, delivers an aspect of Japanese comedy that is rarely seen or heard, especially in anime. Political incorrectness when handled right is funny, regardless of what language it is in and Thermae Romae absolutely nails it and is one of the funniest series you're likely to see all year.

Thermae Romae is available on DVD now from Siren Visual.