Brace yourself for an addictive thrill ride! American Horror Story is TV’s most original and frightening new drama; a deeply stylish psychosexual haunt devised to keep you on the edge of your seat.

Receiving rave reviews from critics and sweeping this year’s awards season, with 17 Emmy Nominations, a Golden Globe and an Emmy Award win for Jessica Lange’s incredible performance; this is one TV series you should be afraid to miss!

After numerous family hardships, a family of three make the move from Boston to LA in the hope of finding a fresh start. Unfortunately for them, this fresh start includes a new home with a dark past that wreaks havoc on the new owners.

To prepare you for the release of American Horror Story Season 1 on DVD and Blu-ray we’ve prepared a character guide so you know exactly who’s who. Now you just have to find the nerve to watch it!

Husband to Vivien and father to Violet, Ben struggles to keep his family and marriage together after the big move. As a psychiatrist with an office at home, he regularly treats troubled and disturbed patients from his study...these are certainly not the type of house guests you would usually encourage!


Wife of Ben and mother to Violet, Vivien is a troubled soul. Battling to reconcile the loss of her baby and her husband’s numerous infidelities; Vivien’s life is far from easy. Once a fabulous musician, it seems her serenade is no longer sweet Vivien.

The daughter of Ben and Vivien, Violet is sarcastic, rebellious and self-harming. She resents her parents for uprooting the family and moving to LA and struggles to fit in at her new school. It’s her requests after hearing of the mansion’s violent history that leads the family to purchase the home.

A regular visitor to the Harmon household as a patient of Dr. Harmon’s, Tate’s mental disturbances are cause for concern. With fantasies of killing and vicious resentment of his mother’s infidelities with their next door neighbour, Tate is most certainly one to watch.

The previous owner of the house, he attempts to warn the Harmon’s about the Murder House and the deathly mysteries that lie within… but is he hiding a dark secret of his own?

The housekeeper of the house for many generations, Moira is seen differently by Ben and Vivien. To Vivien she appears as an old woman, sweet and passive. To Ben however, she appears young, attractive and extremely seductive. 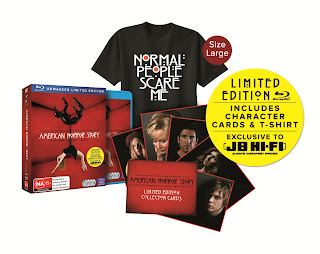 With AMERICAN HORROR STORY SEASON 1 being released on DVD and Blu-ray October 24th, you can order your copy in time for Halloween at http://bit.ly/V3zCzR. Don’t miss the Limited Edition Blu-ray available exclusively to JB Hi-Fi – it includes a bonus “Normal People Scare Me” t-shirt and character cards!

Uncover the terrors of your neighbourhood, reveal the murder houses in your area and explore the Murder House from American Horror Story with the interactive Murder House app at http://www.ahsmurderhouse.com/intl/au/