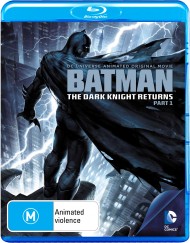 DC Universe Animated Original Movies are continually great. Each one seems to tackle a well known saga but not many are as well known, or as highly lauded as Frank Miller's Batman: The Dark Knight Returns.

Batman is finished. Many moons ago he hung up his cape and cowl and decided to let the city that he loved look after itself for a while, well that was the plan. Bats quickly learns that Gotham can't help but destroy itself from within.

"In the bleak and ominous future of Batman: The Dark Knight Returns, Part 1, it’s been a decade since Bruce Wayne hung up his cape, following most of the other superheroes who had been forced into retirement. Facing the downside of middle age, a restless Bruce Wayne pacifies his frustration with race cars and liquor – but the Bat still beckons as he watches his city fall prey to gangs of barbaric criminals known as The Mutants."

Released in 1986, the printed incarnation of The Dark Knight Returns was a reflection of its time. A much more cynical viewpoint swept the world where banks crumbled, terrorism was rife and Chernobyl showed that the future of humanity was going to be ugly. As with all pop culture, Frank Miller captured the sentiment of the every man and encapsulated it in a story that proved that perhaps there is hope, even after we've long since retired. The great Frank Miller is an incredibly cinematic artist, a fact which is blindingly obvious by how faithful the film adaptations of his best known work, Sin City and 300, have managed to be. TDKR is no different. Many scenes are recreated panel for panel with director Jay Oliva (Young Justice, Green Lantern: Emerald Knights) showing off his skills, and obvious love, for the comic book and animated mediums. As an artist on the screen adaptations of Batman: Under the Red Hood and Batman: Year One he seems to have honed his skills in delivering a punchy film which captures the essence of Miller's grit and grime covered Gotham.

The animation quality of this film is the best yet from DC Universe stable. While slightly more polished than the source material, Miller's trademark blocky style is showcased all the while having been softened slightly to suit the screen. The character designs stay very true to those of Miller's which, unfortunately, seem to draw a contrast to the polished animation. Luckily this seems mainly to be limited to the design of the mutants and all of the main characters just work. The Blu Ray release of this film showcases the animations best qualities with a super-sharp hi-def picture. As an added bonus, those who purchase the Blu Ray release get a couple of extra special features that poor DVD only viewers will miss out on.

While it should come as no surprise that long time DC stalwart Andrea Romano reprises her role as Voice Director but this time she has chosen some surprising, yet well received casting choices. After years (20 to be exact) in the cape and cowl, Kevin Conroy is instantly recognisable as the voice of Batman but not in this instance. This time that honour goes to RoboCop himself, Peter Weller. Weller's initial scenes are difficult to digest purely because he's not Conroy. That said, as soon as the shock wears off, Weller's gift shines through and shows exactly why he was chosen for the part. He portrays an older, wiser and gravel-throated Batman. Batman's arch nemesis is played by the brilliant Michael Emerson who, while under-utilised in Part 1 will have a much more important role to play in Part 2. Commissioner Gordon is fleshed out by the prolific if relatively unknown David Selby while Ariel Winter (Alex Dunphy from Modern Family) steps into the role of Carrie Kelly/Robin.

Tim Burton once stated that Miller's take on the Bat-verse was an influence on his own foray into the franchise, a fact that seems obvious once pointed out. DC Universe Animated Original Movies are all great but no others have the chutzpah to take on a story as huge and as iconic as The Dark Knight Returns so it is surprising, to say the least, that it manages to be as fantastic as it is. This is truly a must own piece of animated awesomeness for comic book geeks, Bat-nerds and even newly formed Nolanised fans.