Since it's release in 2008, Star Wars: The Clone Wars has quickly become a fan favourite among geeks young and old. Often lauded as being the most enjoyable extension of Lucas' franchise, it expands upon a number of storylines that are mentioned in passing in the films or hold particular relevance to a number of main characters. Set between Attack of the Clones and Revenge of the Sith, it fills in a number of blanks and gives relevance to a number of characters that seem important in the films, such as Count Dooku and General Grievous.

Executive Producer George Lucas and Lucasfilm Animation present Star Wars™: The Clone Wars™ The Complete Season Four. The battle to save the galaxy reaches new heights of peril and new depths of darkness. The valiant Jedi Knights and clone troopers defend exotic planets from enemy forces. They wage war underwater, battle across a night-shrouded world and take on the merciless Death Watch. Our heroes are tested like never before as Anakin is haunted by the realities of his past, Ahsoka fights to free her people, and an undercover Obi-Wan braves a deadly bounty hunter tournament.

Season Four culminates with the shocking return of a villain from the past: the ruthless Darth Maul, who will stop at nothing to achieve vengeance. The epic action, timeless characters, and sense-shattering sights and sounds of Star Wars surge on in Star Wars: The Clone Wars The Complete Season Four.

Let's get the gushing out of the way early. Star Wars: The Clone Wars is the must fun you will experience outside of the original trilogy. While comic books and video games may come close (let's not mention the prequels), The Clone Wars continues to be the most fun you can have this side of Mon Calamari. Speaking of which, Mon Calamari is the setting of the initial episodes and brings something brand new to the franchise. While explored in passing in Episode 1 (The Phantom Menace), underwater planets have been somewhat rare in the Star Wars Universe. While anyone acquainted with the original series would be aware of the Mon "It's a trap!" Calamar race, their home world and history are only just being explored now. Visually, scenes on Mon Calamari are stunning and must have been particularly difficult for animators to bring to life. Not only did they manage to pull it off but they absolutely nailed it. The use of physics and buoyancy seemed natural and the lighting, both natural and from blaster fire, brought vibrancy to what could have been just a deep, dark void.

This is how the series begins and it just gets better from there. Each and every world explored brings something new to the table in terms of environment, species, races and even the attire that our intrepid peacekeepers choose to wear. Just like with the original trilogy, clothing has a tendency to become iconic. Would I compare Luke in his Hoth attire to Ahsoka in her Carlac/Death Watch attire? Silly question, that would be sacrilege. That said, it is testament to the cast of designers, artists and animators on this series that the costume changes in characters are eye catching and memorable.

Kevin Kiner serves as composer for the original music elements and the term "original" could not be more apt. While there are still traces of the classic John Williams score, Kiner creates a swathe of original compositions for each of the locales visited. This assists in creating an overall immersive quality to the series, you don't hear the same music on Mandalore as you do on Dathomir. That said, all of the music seems to slot nicely into the grand "Star Wars" mould. Not only is the music very distinctive but so too is the art. Every single locale is given a distinctive feeling which in turn creates a specific feeling. A visit to the dimly lit Aleen creates a foreboding atmosphere that almost predicts the doom that awaits. 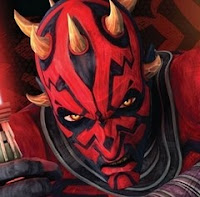 Star Wars: The Clone Wars Season 4, like the series in general, is an absolute delight for Star Wars fans. It delivers entertaining stories, brilliant animation, wonderful music and insight into some of the greatest secondary stories in the Star Wars universe. It is a must see for Star Wars fans young and old although as the rating would suggest, parental guidance is recommended due to amounts of cartoon violence and some particularly creepy episodes involving the Dathomir.

Star Wars: The Clone Wars Season 4 is available on DVD and Blu Ray from the 31st of October. The source used in this review was on DVD and the picture quality was fantastic so, if the opportunity is there, grab it on Blu Ray for a real visual treat.