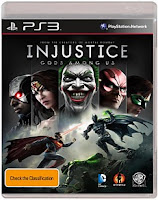 News recently broke that the first episode of Arrow, a brand new series featuring DC's Green Arrow, has pulled in the highest ratings on The CW in 3 years. In a stroke of good luck and timing, Warner Bros Interactive have announced that everybody's favourite archer (Marvel fans excluded), will e a playable character in the upcoming and much anticipated InjusticeL Gods Among Us from the makers of Mortal Kombat.

To say that the Geek of Oz crew are excited would be a MASSIVE understatement!

Check out the all new gameplay trailer after the jump!

Visitors to this year’s New York Comic Con taking place at the Javits Center in New York City October 11-14 (US Local Time) will be able to get their hands on with the game and play the Green Arrow by visiting the DC Entertainment booth (#1238) at the show."