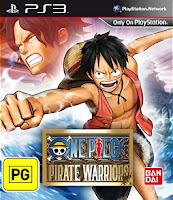 One Piece is the most successful Japanese comic book series of all time. Consider that for a moment. In an industry that sold 503.61 million copies in 2011, One Piece sold close to 260 million copies.

Gaming developers Tecmo Koei are probably best known for their incredibly successful Dynasty Warriors franchise, a series which itself has seen close to 30 individual releases. This inevitable brings us to One Piece: Pirate Warriors which could very well have just been named Dynasty Warriors: One Piece. While the Dynasty Warriors series is becoming somewhat stale due to a lack of innovation since its 1997 inception, it serves the purpose of acting like a vessel for the true star of the game, One Piece.

In terms of gameplay, One Piece: Pirate Warriors is very much a Dynasty Warriors clone, there is not much more than a whole bunch of button mashing with variations of the square and triangle buttons. That said, it is fun to explore all of the Straw Hats different attacks while eventually opening up their signature moves. As a long time One Piece fan, I have taken great delight in smacking down on Buggy the Clown with a "Gum Gum Gattling" here and a "Gum Gum Bazooka" there. This is the most endearing aspect of the game, the sheer fact that it is based upon One Piece.

As a fan, it is a delight to play levels with Luffy, Zoro, Nami and the gang just as it is a treat to explore different levels - just being able to run around the Merry Go was a buzz. The playability of this game is solely reliant on the thrill of unlocking unlockables, including additional characters, character coins and special moves. Beyond this, the game is very repetitive and far too easy to progress through. That said, the ease of play will make the game a welcome addition to the collection of younger One Piece fans although Japanese language voice overs and subtitles may be an issue for some. A word of warning, although the game is advertised as being 2 player, you will have to put in a few hours of solid gameplay to unlock areas and characters needed to play co-op, it isn't 2 players straight off the shelf.

The animation quality is great and has harnessed the aesthetic of Eiichiro Oda's distinctive style. Action sequences are filled with manga inspired screen tones, sequences that also embody the over-the-top writing style of Oda. The story itself takes place in the most recent volumes of One Piece with the characters reminiscing about their most famous adventures which inevitably led to the gathering of crew members. While this story may not be as enjoyable to those who are new to One Piece, as a long time fan, I found it fun to reminisce along with Luffy on how he managed to woo one time thief Nami and the full of hot air Usopp among many others.

While I had a blast playing One Piece: Pirate Warriors, I do concede that I would not have enjoyed it quite so much if I weren't such a fan of the One Piece franchise. It may be a repetitive button masher, but I for one loved it.

One Piece: Pirate Warriors is available now on PS3.