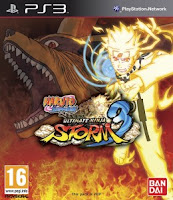 Although not due for release until 2013, the latest incarnation of the Naruto Ninja Storm franchise, Naruto Shippuden: Ultimate Ninja Storm 3, has an all new gameplay trailer and details on what you can expect.

Keeping in step with the manga series our eponymous hero, Naruto, will do battle with "The Masked Man" and defend Kanoha from Nine Tails himself.

If you have any idea of what that means, you should have just wet your pants a little. If you don't know just rely on the fact that this is going to be an anime styled action epic based on one of the most successful manga franchises of all time, 'nuff said.

Check out further details and a gameplay trailer after the jump!

The critically acclaimed Naruto Shippuden Ultimate Ninja STORM series is back in 2013 on PS3 and Xbox 360, celebrating the return of highly awaited boss battles and welcoming brand new features to revamp the game experience.

Introducing masked Man and Nine-Tails assault on the Leaf Village for the first time in a video game, the story mode will let you live the most recent events of the anime with a degree of faithfulness never-before-seen.