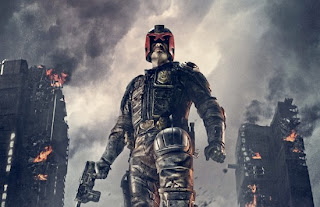 Ever played a video game and thought this would make a good film? Well Dredd is a case of the opposite; confronting violence, paper-thin characters, atmospheric environments, simple plot points and a truly woeful script make this latest offering by Pete Travis (Vantage Point) seem like a first person shooter game masquerading as a movie.

Dredd is based upon the UK comic book character of the same name. Employed by the Hall of Justice, he is judge, jury and executioner all wrapped up in an efficient crime-fighting package. The film is set in a not-too-distant but all-too-hackneyed future dystopia where drugs and violence have all but destroyed the fabric of society. Seem familiar? For once, I’d like an action film to depict an imagining of a future which isn’t a dysfunctional and corrupt slum-filled cesspool. It even has the ubiquitous genetic mutation element – the cliché du jour for films of this genre.

We first meet Judge Dredd (Karl Urban) in hot pursuit of three armed and dangerous felons. The scene basically establishes the world he inhabits and the code of behaviour to which he adheres. This leads to Dredd meeting his rookie partner Anderson (Olivia Thirlby), who is blessed with psychic abilities. The two Judges set off on their first mission together, a routine triple murder in the crime-laden residential tower Peach Trees. The block is run by crime boss Ma-Ma, played superbly by Lena Headey (Games of Thrones, 300). The Judges are trapped inside as the building is completely locked down. Returning to the video game motif, the Judges are forced to go level by level through the tower, vanquishing enemies by any means possible. 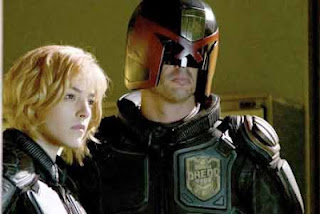 The films looks amazing; from the sets to the character details, I was very impressed by the visual representation. The use of fluorescent lighting is effective in creating a claustrophobic feel, the lack of a natural light source adds to the feeling of being trapped in a helpless situation. For a film set almost entirely in a block of units it never felt like repetitive set design. I appreciated the way the practical effects were merged with the usual array of computer-generated graphics.

The performances were solid without being spectacular – with the exception of the superb Lena Headey, who seemed to relish her role as the exceptionally violent, scarred and sadistic crime boss Ma-Ma. Karl Urban was passable as Dredd, seemingly doing his best Clint Eastwood impersonation. I would have preferred a bit more background to his character; at times it was quite robotic, almost echoing Robocop or Blade Runner’s lead Deckard. And frankly, I’ve seen droid characters with more personality.

Sadly the film is really let down by its predictable and at times laughable script. There were moments where I was simply stupefied by how cliché and childish the writing is. This is Carlos Ezquerra’s first screen-writing attempt and I’m honestly astounded that it was used. There is basically no character development and very little engagement between the main protagonists. Dredd is introduced as a strictly dispassionate arbiter of justice and never seems to deviate from that portrayal. It would have been far more compelling for him to have his values tested or endure an experience which allows his character to rise above his perfunctory attitude to both crims and his colleague. Given the quality of the rest of the film, Dredd could have become a B-grade action gem that people could always come back to, but given the poor writing it becomes almost forgettable. 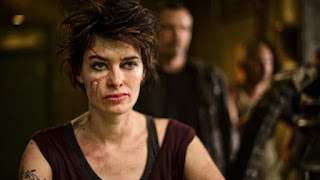 In the end this is a film for people who like big guns and exploding body parts, which disturbingly I’m sure there is a market for. Whilst it has its issues, I must admit I did have some fun with it. It’s not a cerebral feast but then I’m not sure if it’s intended to be. The best that can be said is that at least this version slightly redeems what Sylvester Stallone did to the character – if only by a slim margin.