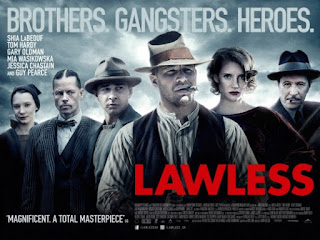 A frustrating thing about being a film fan is watching a promising film succumb to its various flaws, like watching a car crash in slow motion, leaving it battered and bruised and ultimately unsatisfying. Lawless, the latest offering from John Hillcoat, is based upon the historical novel The Wettest County in the World by Matt Bondurant (grandson of the main protagonists), which tells the story of the Bondurant Brothers who ran a Virginia moonshine operation during the 1930s prohibition era. The Bondurant Brothers, thanks to a few lucky escapes due mostly to rum good luck, are believed by the local county to be unkillable and untouchable. They meet their match, however, when Special Agent Charlie Rakes (Guy Pierce) is sent from Chicago to stop the flow of moonshine. A great narrative premise, and whilst brimming with potential, Lawless could not overcome its awful screenplay and chaotic editing issues.


John Hillcoat is a competent director who has the critically acclaimed The Proposition and The Road to his name, so it’s odd that this film had so many conspicuous issues with it. Most noticeable was the screenplay by legendary singer/song writer Nick Cave. Whilst he may be at home with microphone in hand, his lack of experience in screen-writing was rather evident here. The plotting was simplistic and the script repetitive. The essence of the times was never captured through the language, which was glaringly anachronistic. Master craftsmen like the Coen Brothers have long set the benchmark for capturing regional dialogues. This feels like a 2012 film set in 1930. In addition, for much of the film, I found I could barely hear the characters due to their mumbling, a problem that could have been overcome by clever sound editing. Perhaps this film may be worth a re-watch with the sub-titles turned on, but I feel that reading the screenplay may be just as painful as hearing it. 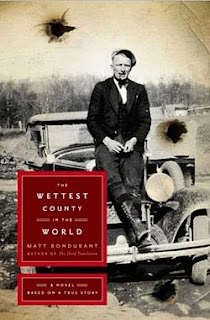 Strangely enough, the film was edited by Dylan Tichenor whose credits include Brokeback Mountain, Doubt, The Town and There Will Be Blood to name but a few – some of the most influential films of the 2000s. So the question must be asked – why has this film missed the mark? Rumours had been circulating about meddling from the studio and restriction of Hillcoat’s involvement, which would explain the final result.


The cast of the film only added to my frustration, in that it boasted some pretty impressive names that still couldn’t lift the film out of its flatness: Tom Hardy, Gary Oldman, Jessica Chastain, Mia Wasikowska, Guy Pierce and Shia LaBeouf. Tom Hardy, with only a handful of lines, managed to be both imposing and credible, whilst still carrying the immense bulk he put on for his role as Bane in The Dark Knight Rises. Guy Pierce is allowed to be at his creepy best and presents a truly unique looking villain – think greasy gunman meets Crispin Glover. Jessica Chastain and Mia Wasikowska give probably the best performances of the film. Jessica Chastain exudes her usual sultry charm whilst she is balanced by Wasikowska’s straightforward innocence. 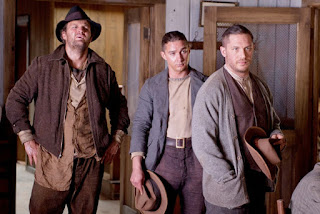 This is not a bad film and many people will enjoy it. I guess given all the elements involved I was just looking for more. I wanted to get to know everyone who inhabited this world. I think this is yet another example of book-to-film adaptation which would work far better as a television series in the vein of Boardwalk Empire or The Wire. Like a fine jar of moonshine, Lawless needed the opportunity to open up and breathe before being consumed, but sadly left me feeling unengaged and disappointed at the wasted material.