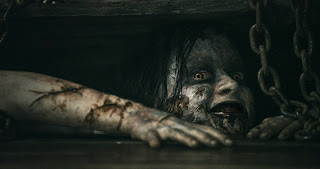 Sweet mother hubbard, I think I just pee'd a little. After months of speculating whether the remake of Evil Dead would be any good a teaser pops up and scares the poop out of us here at Geek HQ.

After recent disappointments in the field of horror films it appears as though Evil Dead have got it right.

Check out the official Australian teaser after the jump!

Synopsis: Five twenty-something friends become holed up in a remote cabin where they discover a Book Of The Dead and unwittingly summon up dormant demons living in the nearby woods, which possess the youngsters in succession until only one is left intact to fight for survival.