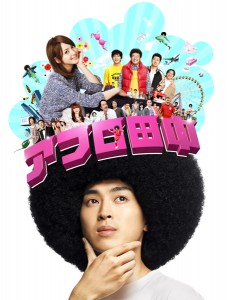 Afro Tanaka sounds like a weird title for a film, but it's the perfect title for a weird film. Based on a manga series of the same name by Masaharu Noritsuke, Afro Tanaka is a quirky film that manages to juggle off the wall manga inspired scenes and larger than life characters while still injecting some honest concerns held by young Japanese men.

Bullied as a child for his long curly hair, the decidedly uncool Tanaka opts for an afro, convinced that it will turn his luck around. But several years and a series of poor decisions later, he’s 24, stuck in a crappy job, single and still a virgin. With a high school friend about to marry, the pressure is on for the hapless Tanaka to find a date and fulfill a childhood pact. The situation looks grim, but can his afro save the day? An enjoyably awkward comedy based on the popular manga series of the same name - Japan Foundation

Sure, Afro Tanaka isn't going to win any awards for being a tear jerker, but it does manage to pull some hearty laughs on account of the larger than life main protagonist, Tanaka. The laughs are held along by the juxtaposition between Tanaka's subdued outward persona and internal monologues that sound like they come straight from the pages of a comic. Being such an introverted character also flies in the face of having such a gigantic ball of hair on his head, a trademark that seems to be overlooked by many other characters in the film. The comedy in Afro Tanaka, while silly and somewhat low brow, doesn't resort solely to toilet humour and maintains a standard that is, for the most part, family friendly. 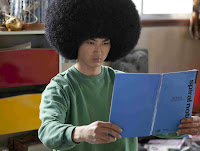 Of course, the barrel of laughs can't be attributed solely to director Daigo Matsui. Of course, being based on a manga series, Noritsuke also deserves a great deal of credit for implementing certain elements such as Tanaka's trademark matching tracksuit, puffy jacket and off kilt stance - he is the epitome of uncool. Finally, actor Shota Matsuda, who is best known for his roles in Ikigami (for which he won a Japanese Academy Award) and numerous J-drama roles delivers a fantastic comedic performance. While better known as a dramatic actor, Matsuda is the embodiment of Tanaka, becoming infinitely self aware. Everything from his facial expressions to his body movements and even his serious, Samurai-like speech patterns are straight off the manga page. The majority of humour in the film stems from Tanaka's complete and debilitating fear of women and the unknown realm of dating. This element of the film is the most familiar and best transcends cultures on the screen.

The ending in this film is completely ludicrous and no less than a complete surprise. Finishing with a guest appearance and performance by

Afro Tanaka is a hilarious film which, unlike it's American counterparts in the field of comedy, doesn't instantly resort to swearing and potty humour. While completely silly, Afro Tanaka is a great fun film which injects an over the top character into real-world Japan creating a fantastically fun film. Embrace the 'fro.

Afro Tanaka is screening as a part of the Japanese Film Festival in Sydney on the 22nd of November, Melbourne on the 4th of December and in Canberra on the 15th of December.